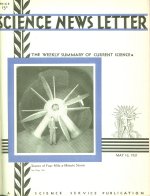 An artificial windstorm blowing 240 miles per hour has been found possible in the remarkable wind tunnel recently constructed at Pasadena for the California Institute of Technology. The outfit is a feature of the new Guggenheim Aeronautical Laboratory. This velocity exceeds the original hopes of the designers.

A wind tunnel enables airplane investigators to reverse the conditions of normal flying with obvious experimental convenience. One simply runs the air past a stationary plane instead of running the plane through stationary air.

The Pasadena tunnel might be likened to a huge reinforced concrete doughnut, flattened to an oval contour and set on the edge. The aeronautical laboratory itself is built around the tunnel. The doughnut is of course hollow, and varies from 10 to 20 feet in cross section. A striking view of the interior of the tunnel and of the huge fan that drives air through it is shown on the front cover. At this point the tunnel is 15 feet in diameter.

The one remaining unknown chemical element, number 85, had been detected for a first time in seawater, in potassium bromide, a common headache drug, and in a number of well-known minerals by a method of super chemical analysis so delicate that it can recognize one part in 100 billion of water.

The discovery is announced by Dr. Fred Allison, Edgar J. Murphy, Prof. Edna R. Bishop and Anna L. Sommer, working at the Alabama Polytechnic Institute, Auburn. Two of these, Dr. Allison and Mr. Murphy, are the same scientists who a year ago discovered the next-to-the-last unknown element, number 87, next door neighbor to radium in the chemists table of ultimate building blocks of matter.

The new element, 85th when the elements are arranged in the order of the weights of their atoms, is a family relative to iodine, long popular as an antiseptic. It has not yet been separated, for only one part in a billion is present in the substances examined.

The Labrador Current is weak this spring, and brings few icebergs. The warm Gulf Stream is taking advantage of this weakness to invade northern waters more deeply than usual.

These are among the first results of the exploratory trip of the U.S. Coast Guard vessel General Green, under the scientific direction of Dr. Olav Mosby, a young Norwegian oceanographer who is making a study of ice movements and their causes in the waters off Labrador and Newfoundland.