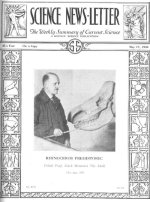 One of the most interesting of recent finds in paleontology has been the complete carcass of a Pleistocene rhinoceros, unearthed in an abandoned mine in the Starunia region in Poland. Skin, hair muscles, and all other tissues were well preserved, owing to the sealing up of the monster in a kind of oily earth, which kept out the microorganisms of decay for many thousands of years.

Bringing the big body to the surface presented a considerable problem in mining engineering, for the shaft of the old mine was too small and its sides slippery and treacherous. The Polish Academy of Science borrowed a company of soldiers from the Army, and with their assistance enlarged the pit and finally hauled their bulky find to the top.

The carcass has been dissected and studied with the care that the great rarity of such a find merits. Its skin and skeleton will become permanent exhibits.

The SCIENCE NEWS-LETTER is indebted to Tytus Filipowicz, Polish minister to the United States, for the photograph on the cover, showing Prof. Jan Stach, director of the physiographic museum of the Polish Academy of Science, measuring the massive skull.

Movies showing microscopic cells 3,000 times larger than they actually are and bringing out slight variations in shade that are unnoticed by the eye looking through a microscope have been taken at the Rockefeller Institute of New York, Dr. Heinz Rosenberger reported recently to the Society of Motion Picture Engineers.

Dr. Rosenberger said that during the past few years, scientists have been able to increase more than 10 times the magnifying power to which movies can be applied. Among the interesting discoveries made by these pictures is an undulating membrane surrounding white blood cells that is much larger than the cells themselves.

This membrane was invisible to the eye making examinations through ordinary microscopes, but it was brought out by the photo emulsion, which often reveals differences in shades too fine to be detected by the eye. Dr. Rosenberger pointed out that the usual stains used to outline cells cannot be employed with the camera. When subject to the great light necessary in taking the pictures, the stains cause the cells to act abnormally and to die fast.

One of the moulds (a Penicillium) has been found to kill cultures of some bacteria, notably pus-forming cocci and diphtheria bacilli. This interesting news comes from Dr. Alexander Fleming of the Laboratory of the Inoculation Department, St. Mary’s Hospital, London.

The mould is similar to the common fungus that sometimes spoils oranges and other fruits. Even when cultures are filtered, the resultant liquid, which is called “penicillin,” is effective. It can be kept for some time if it is neutralized, but if not, it loses its power after from 10 to 14 days at room temperature. It does not affect all bacteria (for instance the thyroid group are resistant to its action); on the other hand, staphylococci, streptococci, and diphtheria bacteria are killed rapidly.

Penicillin is not toxic to animals even when given in enormous doses, and it is also nonirritant. It is therefore possible that it may turn out to be a useful antiseptic for combating infections caused by certain pathogenic bacteria.