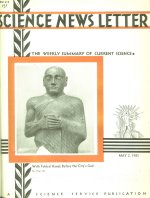 Good sculptors, those Sumarians who lived in the land around about Ur of the Chaldees 4,000 years ago!

This weeks cover picture shows the upper portion of a broken life-sized statue found at the city of Lagash, north of Ur. The features, finely cut, portray a man of dignity and reserve. The proportions of the body are skillfully handled. The arm muscles almost ripple beneath the stone, and the drapery over the left arm is softly folded.

The statue, which is now being exhibited in London by Sydney Burney, is pronounced to date from the time of Gudea, a city governor of Lagash, who lived between 2400 and 2300 B.C. That the statue may represent Gudea himself is the possibility suggested by an expert of the British Museum. The features closely resemble those in some of the statues marked with Gudeas name.

The shaven head indicates that the man held priestly offices, and the attitude of the folded hands shows that the portrait represents him as he appeared before the citys god.

CONDITION OF BRAIN JELLY SAID TO BE CAUSE OF INSANITY

Whether you are sane or crazy depends on how solid your brain jelly is. If it is too thick, you will have one type of madness; if it is too thin, you will be afflicted with a different kind. Thin-brained insanity can be treated with drugs that make the brain jelly thicker, such as coffee or alcohol. Thick-brained insanity will yield to drugs with the opposite effect, such as bromides.

That is, in very much simplified language, the theory of insanity and its possible treatment presented before the National Academy of Sciences in Washington this week by Prof. Wilder D. Bancroft of Cornell University and Dr. G. Holmes Richter, National Research Council fellow in chemistry.

In more scientific terms, the living portion of the brain and nerves, the physical substratum of mental and nervous effort, is a colloid. Familiar household examples of colloids are jellies, the white of eggs, and mayonnaise dressing. The family resemblance of these to brain-stuff will be recognized by anyone who has ever handled calves brains from the butcher shop.

Rods of quartz heated in the Bunsen burner have been made to send out a new kind of light, the meeting in Washington of the National Academy of Sciences was told this week.

The quartz, in which a compound of the rare metal neodymium had been dissolved, was prepared by Prof. R.W. Wood of the Johns Hopkins University. When heated the rods give a light whose rainbow or spectrum does not include all the colors but is crossed by dark bands.

A white-hot, incandescent wire, like those of tungsten used in the electric lamp, gives white light in which none of the possible colors is missing. The neodymium, however, has the unique property of sending out only special vibrations of its own. Light passed through cold neodymium or other rare earth compounds has these same colors removed from it. Only rare earth elements show this peculiar behavior.