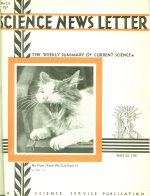 In the spring a young mans fancy turns to thoughts of another nap even more often than it does to amative imaginings, Tennyson to the contrary notwithstanding. Spring fever, that drowsiness and mild lassitude that comes of warmth and well-being rather than of the crabbed winter of fatigue, has never received the serious attention of research workers in pathology–and it is to be hoped it never will. They might turn up a cure for it, which would be most deplorable.

Whatever spring fever is, it is no monopoly of the higher primates. Its benign affliction is visited on our humbler brethren as well. Cornelia Clarkes cat had a fine attack of it. Miss Clarke herself, however, remained awake enough to snap the camera shutter at the right moment.

A simpler, cheaper method of smelting zinc from the concentrated ore in purer form than it has been recovered in the past by smelting methods has been devised by Charles G. Maier, metallurgist at the Pacific Experiment Station of the U.S. Bureau of Mines in Berkeley, Calif. The new method is said to be the most important change in the smelting of zinc since the metal was first smelted by the Chinese in 600 A.D.

Mr. Maiers process was described before executives and engineers of the zinc industry at the meeting of the American Zinc Institute by R.S. Dean, chief engineer of the metallurgical division of the Bureau of Mines. While it is not expected that the process will immediately revolutionize the industry, it will doubtless be adopted by many plants as rapidly as old equipment can be economically discarded.

The superintendent of the Metrology Department of this laboratory is worried because four 24-meter invar surveying wires persist in showing a discrepancy in measurements of about 2 parts in a million.

These wires belong to the Bureau International des Poids et Mesures, in Paris, and were measured at Teddington in 1928, when a disagreement of two parts in a million was found between the values obtained at the two institutions. They have been sent over the Channel again for intercomparison with the Laboratory standards, and the results show that the disagreement found in 1928 persists.

Invar is a metallic alloy that keeps its length unchanged with changes in temperature and is used for this reason in making watch parts.