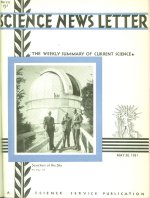 Life is a rare phenomenon in the universe, Sir James Jeans, British astronomer, assured the Franklin Institute meeting at which he was presented the Franklin Medal, one of Sciences highest awards.

I leave it to you to be pleased or not, Sir James said, at a large fraction of the life of the universe being concentrated on our planet.

His theory is that the planets were formed by the close approach to the sun of another star that pulled out of the sun by tidal action a great cigar-shaped streamer of gas, which condensed like drops of steam into the planets.

Since stars are scattered in space as sparsely as three grains of dust in a large room, the close approach of two stars is a rare accident of the universe, Sir James explained. Life can only exist on just the proper kind of planets created by such passing of stars in the universe. For this reason Sir James considers life very rare indeed.

Sir James has been lecturing in many different parts of the country during this week and last. He visited the Mt. Wilson observatory in California, and the cover of the SCIENCE NEWS LETTER this week shows him standing before the great 100-inch telescope, at present the largest in the world. Sir James is pictured in the center, Dr. Edwin P. Hubble is on the right, and Dr. Walter S. Adams on the left.

New facts on the chemical control of the life processes of the yeast cell were reported to the meeting last week of the Royal Society of Canada by Dr. Helen Stantial and Dr. W. Lash Miller of the chemistry department of the University of Toronto. They have found that acetate of soda and certain sugars will send yeast into a spore or sleeping stage.

It was Dr. Miller who 2 years ago surprised biological investigators by announcing at a meeting of the Royal Society the chemical formula for a substance, similar to but not identical with the vitamins, that is necessary for the growth of yeast.

A test that can be used to measure scientifically the changes of attitude produced in children by any particular motion picture film was described in a report to the Midwestern Psychological Association by its president, Dr. L.L. Thurstone, of the University of Chicago.

The test has been used, for example, to determine the actual effect of a picture that has been criticized as unfriendly to the Chinese.

When it is desired to test attitude toward nationalities, a list of 20 nationalities is presented to a group of students. The nationalities are arranged in pairs so that every nationality is paired with every other one in the list. The student answers, for each pair, the question, Which would you rather associate with?

By combining all the answers, it is possible to draw up a scale showing for that group the average preference for, or prejudice against, each of the nationalities. As might be expected, in Dr. Thurstones experiments, Americans came out at the top of the list, other English-speaking peoples came next, and races other than our own fell to the bottom.