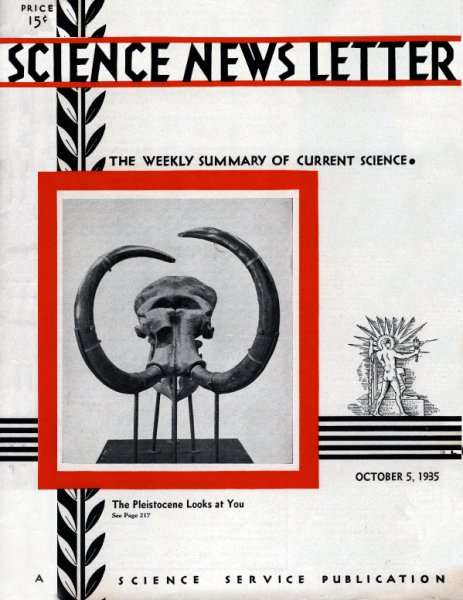 Looking squarely at you through the frame of its great curved tusks, the huge skull of a mammoth recently placed on exhibition at the New York State Museum in Albany produces a most awesome effect. The awesomeness is not diminished, either, by the leglike arrangement of the half-dozen supporting rods needed to hold up its ponderous weight, which somehow produces a vague suggestion of a vast, fantastic insect, striding out of an antediluvian dream.

The skull, known officially as the Randolph Mammoth, was found during excavation at the New York State Hatchery near the town of Randolph. It was in fragments, and cost more than a little difficulty and labor to get together, but the final assembly produced an almost perfect specimen.

The tusks are complete, and are unusually fine specimens. One is exactly 9 feet long, the other 9 feet 4.5 inches.

EVOLUTION AND DIET CAUSING MAN TO LOSE HIS TEETH

A gloomy future for the teeth of mankind—a future in which we shall have to pamper our mouths increasingly—is foreseen by Dr. William Seidel of the U.S. Marine Hospital in Norfolk, Va. Dr. Seidel bases his forecast on existing knowledge of the causes of various dental ills.

Evolution and diet are causing man to lose his teeth, in Dr. Seidel’s opinion. Since evolution is an irreversible process, the human oral cavity appears destined to be forever afflicted with caries, pyorrhea, and misplaced teeth, he says.

Loss of teeth through evolution has been going on for centuries, Dr. Seidel points out. The great length of time is indicated by the fact that we have already completely lost 16 permanent teeth, having now only 32, while the usual number for mammals is 48. Individually one can lose a good many teeth at one séance with an exodontist, but the evolutionary process is slow, and it has required many centuries to produce such a change in our dentition.

This evolutionary change dates back at least to the age of the caveman, according to Dr. Seidel, and accompanying it there has been a gradual degeneracy of the whole masticatory apparatus. The teeth themselves, he says, are not anatomically degenerate, with the exception of the third molars, which are often rudimentary; and as some people do not have third molars, the evolution in dental anatomy may still be in progress.