Success in treatment of pneumonia with olive oil has just been announced by Drs. A. C. Frazer and V. G. Walsh of St. Mary’s Hospital Medical School in London.

The oil is emulsified and then injected into the veins. The high temperature of pneumonia patients dropped to normal within twenty-four hours after the oil injection and three weeks later the patients were well.

Patients suffering from septicaemia, commonly known as blood poisoning, and from erysipelas and acute rheumatism also improved after the olive oil treatment.

The emulsified olive oil injections also seem to prevent the reactions which frequently follow injection of vaccines, tuberculin and insulin, making it possible to use much larger doses of these substances.

The remarkable effect of the olive oil is considered due to absorption of the pneumonia or other toxins circulating in the blood. These poisons lose their potency after adhering to the globules of the oil.

Drs. Frazer and Walsh first conducted test tube experiments with emulsified olive oil and the toxins of the diphtheria germ and tetanus or lockjaw. Then they investigated the effect of the olive oil of animals infected with these germs. Finally it was tried, with success, on patients.

Oil idea wasn’t so odd, at the time 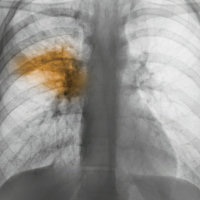 Before antibiotics, treating pneumonia (shown in this colorized X-ray) was a varied affair — but the approaches weren’t unscientific.

In the early 1900s, pneumonia was a leading cause of death in the United States. Without antibiotics (not widely available until the 1940s), there was no magic bullet. So it’s no wonder researchers were experimenting. But A.C. Frazer and V.G. Walsh weren’t just trying out treatments willy-nilly. Their oil approach had some scientific roots.

“It doesn’t strike me as strange,” says Harvard’s Scott Podolsky, author of Pneumonia before Antibiotics. “It kind of looks like contemporary medicine.”

Serotherapy, a popular treatment by the 1930s, involved injecting animal-derived antibodies to a specific strain of bacteria into people. The tactic required some level of immunological know-how. Likewise, the idea of using oil to sop up nasty bacterial by-products for detoxification in the liver depended on an elevated understanding of how the body fights and clears invaders.

If the oil idea still sounds outlandish, consider that penicillin, the first therapeutically useful anti­biotic, was referred to as “mold juice” following its discovery by Alexander Fleming. In a not-so-incidental twist, Fleming also worked at St. Mary’s Hospital Medical School, probably in a lab just down the hall from Frazer and Walsh. —Elizabeth Quill