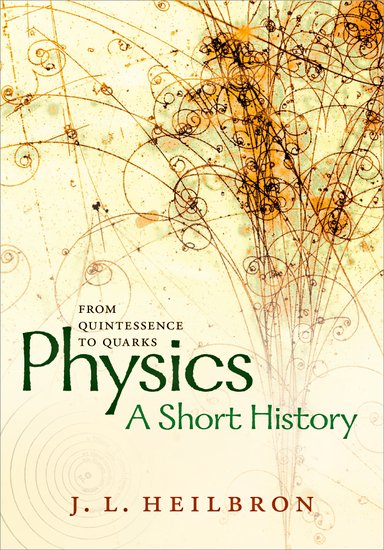 Modern physicists like to compare themselves to the ancient Greeks — searchers for knowledge about the ultimate foundations of reality. But science historian John Heilbron argues in his latest book, Physics, that modern physics is not much like the Greeks’ contemplation of nature.

“In antiquity, physics was philosophy, a liberal art, the pursuit of a free man wealthy enough to do what he wished,” Heilbron writes. In Greek philosophy, “physics … inquired into the principles regulating the physical world from the high heavens to the Earth’s center, and from the human soul to the life of the least of living creatures.” It was about defining man’s place in nature, for the purpose of identifying “the ethical consequences of … the way the world began and persists.”

So Heilbron refers to premodern physicists as physici who practiced physica, and proceeds to tell the story of how the physica of the ancients became modern physics. In an engaging 200 pages, he documents the step-by-step transformation of the philosophy of the past into the science of the present.

Heilbron’s deep insight into the workings of scientific minds and the mechanisms of history informs every sentence of this concise but rich volume. Apart from a slight confusion on whether the modern idea of quintessence refers to dark matter or dark energy, it’s also a model of scientific as well as historiographic rigor.

His story begins with Greek science, which was initially multifaceted but ended up dominated by Aristotle, whose science was revitalized by Arabic translators after the ascent of Islam. Islamic scientists went on to develop science of their own that, along with Arabic translations from Greek, invigorated the intellectual revival in Western Europe during the Middle Ages. A new institution, the university, provided impetus for exploring the natural world more deeply — mostly by theologians seeking insight into religious issues. Ultimately modern science emerged from the works and writings of Copernicus, Francis Bacon and Galileo, leading to the triumph of Newton’s laws of nature and his principles of natural philosophy.

But even then, modern physics had not yet fully formed. In the 18th century, the modern approach began to congeal around studies of electricity. By the end of the 19th century, the resulting classical physics had matured, only to be deposed in the 20th by the dual revolutions of relativity and quantum mechanics. And then came the consortium of university, government and military/industrial endeavors that emerged from 20th century physics, shaping a present-day physics much different from the Greeks’ physica. Nevertheless, Heilbron notes, physicists today are “pursuing modern versions of Greek speculations.”

Buy Physics from Amazon.com. Sales generated through the links to Amazon.com contribute to Society for Science & the Public’s programs.