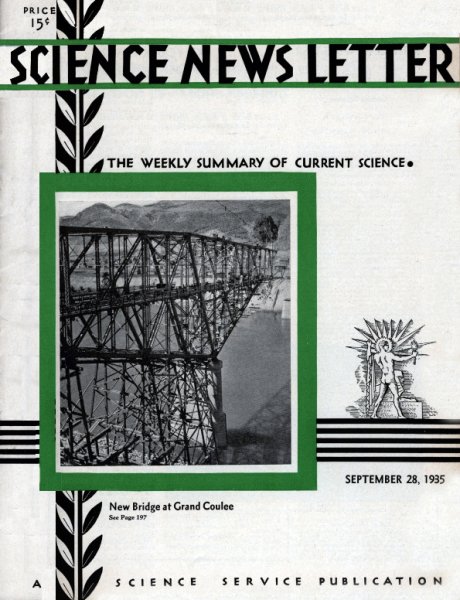 With construction on Boulder Dam now virtually complete, Grand Coulee Dam on the Columbia River is stepping into the engineering forefront.

Bids have just been opened by the U.S. Bureau of Reclamation for 4,220,000 barrels of cement for the Grand Coulee Dam. This mammoth order is said to be more cement than was used in the whole Boulder Dam, exclusive of the power plants. Yet it is less than half of what will be needed at Grand Coulee.

Already plans are under way for the utilization of the arid but fertile Columbia River basin after irrigation, made possible by Grand Coulee Dam, becomes a reality. Work- relief funds amounting to $250,000 have been authorized for soil-classification studies, preparation of better topographic maps, and the preparation of a land-ownership map.

Our cover photograph shows the government bridge under construction at the dam site. It is an official photograph of the U.S. Bureau of Reclamation.

Modern alchemy, the transmutation of one chemical element into another by bombardment with high-speed subatomic “bullets,” is made possible by an electrical sorting arrangement inside each atom.

How the subatomic sorter helps weed out parts of the incoming atom bullets and allows others to enter the nucleus and create a different, heavier atom, is explained by a new theory just announced at the University of California.

Prof. Lawrence’s research had found many cases where an element, bombarded with deuterons from his giant slingshot accelerator, was increased in mass by a unit of one. Thus, aluminum of mass 27, when struck by a deuteron of mass 2, turned into aluminum of mass 28 and released a hydrogen particle of mass 1, a proton.

Similarly, sodium whose chemical symbol is Na, entered into bombardment reactions of the type: Na23 plus H2 produces Na24 plus H1. In each case, part of the deuteron (H2) was captured and went to form a heavier atom, while the rest of the deuteron turned into a proton (H1).

Newfound solar signposts that point out the location of sunspot activity were described before the American Astronomical Society by Dr. Philip C. Keenan of the University of Chicago’s Yerkes Observatory.

The solar signposts are streamers coming out from the sides of the gigantic flames of glowing hot gas known as solar prominences. In some cases, the prominences have been known to shoot out from the surface of the sun for distances up to 500,000 miles—more than the radius of the sun.

A study of over 10,000 sun photographs taken at Yerkes Observatory in the last 28 years led to the discovery of the sunspot signposts. Certain types of prominences seen near the sun’s east and west edges show streamers moving toward or away from definitely located points on the sun’s surface. When these points were checked against sunspot records, Dr. Keenan stated, they proved to be the centers of sunspot activity on the same date that the prominence was observed.