Warm waters may muscle out mussels
Warming waters make it harder for mussels to get a grip. New research shows that the tough, fibrous threads that anchor the bay mussel Mytilus trossulus to its rocky intertidal digs are 60 percent weaker in 25° Celsius waters compared with their strength at 18° C, reported Emily Carrington of the University of Washington Friday Harbor Laboratories. Mussels are constantly replenishing these fibers, which last about two months in winter and up to a month in summer. As the oceans warm, the range of the species may shift, or perhaps having weaker threads may mean that other species will muscle in on mussel territory, Carrington said February 16. — Rachel Ehrenberg

As the worm divides 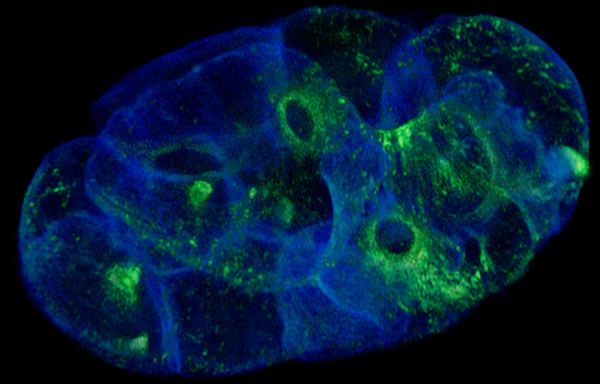 What looks like wormholes in outer space is actually the cells of a worm-to-be. Scientists can witness this delicate choreography of roundworm cell division thanks to a new imaging technique called Bessel beam plane illumination, Eric Betzig of Howard Hughes Medical Institute’s Janelia Farm Research Campus in Ashburn, Va., reported February 15. A light beam that doesn’t scatter, the same sort as those in bar code scanners, sends a sheet of light sweeping through the side of a sample. As the embryo of the roundworm C. elegans divides — seen above at about the 12-cell stage — the technique reveals the protein myosin (green) contracting, pinching off daughter cells (cell membranes in blue). The approach can capture nearly 200 images per second without harming the cell, allowing scientists to shoot mini-movies of cellular processes. — Rachel Ehrenberg

Ridges fingered as tree-climbing aids
Detectives who use fingerprints to find criminals should be thankful that humans descended from tree-dwelling ancestors. The fine ridges that mark the skin of primates’ hands and feet might have evolved because they helped the animals grip tree branches, anthropologist Nate Dominy of Dartmouth College reported February 16. Dominy and colleagues tested the idea using an artificial silicon finger with skin ridges. They dragged tree bark across the finger and measured the friction. When the bark’s ridges were rubbed perpendicular to the finger’s ridges, friction increased by 50 percent compared with tests when the bark and finger ridges ran parallel to each other. Dominy suggests the enhanced friction would have allowed early primates to more efficiently climb up and down trees. — Erin Wayman