THE PRECIOUS JEWELS IN HIS HEAD ARE TWAIN 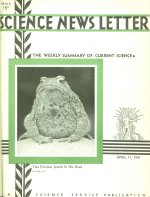 Did you ever stop to take a really good look at a toads eyes?

Just as many a plain-faced person is redeemed from ugliness by having fine eyes, so also does the toad find salvation from his ungraceful form, his abysmal mouth, his warty skin. His eyes are of beryl and chrysoprase.

In his almost-too-often-quoted line about the toad bearing a precious jewel in his head, Shakespeare was only repeating the current belief of his time, which was older than Aristotle. Though then it was believed that this jewel was concealed inside the toads broad cranium, it seems quite possible that the idea first arose from someones seeing a toads eye shining in the dusk by reflected light. For like most hunters that stalk their prey by half-light, the toad has highly reflecting surfaces on his eyes.

The problem of using the vast energy of the sun for human purposes is nearing a solution. Dr. Bruno Lange of the Kaiser Wilhelm Institut, Berlin, has recently perfected a device that converts sunlight into electric current more completely than ever before, at a price that may compete with present hydroelectric installations.

Silver selenide is the substance that best does the trick of converting light to electricity at present. A sheet of metal is covered with a thin layer of silver selenide, which in turn is coated with a transparent layer of a second metal only a few molecules thick. Light passing through the transparent film sets up a current between two layers of the metallic sandwich.

Fifty to a hundred and fifty times more current is obtained from this than from a similar sandwich of copper oxide between two layers of copper, which was the immediate forerunner of the silver selenide cell. The superiority of the copper oxide sandwich over all other converters then known was discovered 3 years ago. Experiment has verified the conjectures about the possible applications of such cells. A copper oxide cell 3 inches square has driven an electric motor by dull sunlight for some months now in the Siemens Laboratory in Berlin.

SYNTHETIC LUBRICATING OIL MADE OUT OF PARAFFIN WAX

Just as the chemist in past years has invented ways of making gasoline out of heavy oils, he now has made a synthetic lubricating oil out of paraffin wax.

This accomplishment, which further allows the oil producer to fit his product to the market regardless of his crude-oil supply, was reported to the American Chemical Society by F.W. Sullivan, V. Voorhees, A.W. Neely, and R.V. Shankland, chemists of the Standard Oil Company of Indiana. They flew to the Indianapolis meeting in an airplane oiled with synthetic lubricant of their own making.

The manmade lubricating oil is claimed to be superior to the oil that is simply separated out of the crude petroleum during the usual refining process. It costs more money to make at present, but it can be made in any desired viscosity, it has the desired pale straw color, it does not oxidize easily, and it is more resistant to temperature changes than any known natural oil.