Anyone who has slogged through some prolonged, hope-sucking endeavor to get published may wish to toast the first full English translation of this storied herbal. The six-volume botanical masterpiece from the 17th century still has things to say to modern readers, as well as to long-suffering writers. In fact, the book inspired a 2005 pharmacology paper reporting nine novel compounds for further drug research. 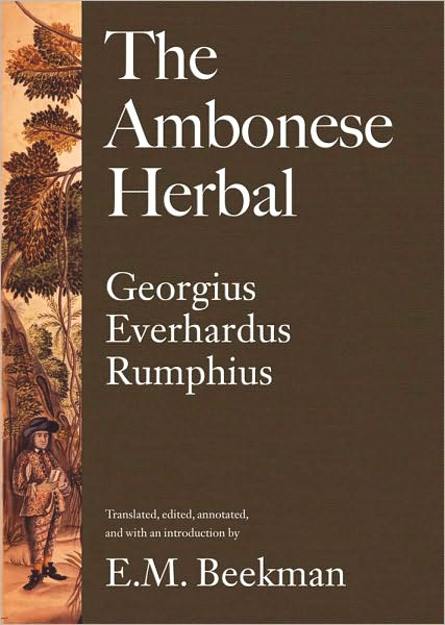 The herbal’s writer, German-born Georg Eberhard Rumf (Latinized as Rumphius) shipped off to the Spice Islands in what is now Indonesia in 1652 to work for the Dutch East Indies Company on its spice route. (For a taste of spice politics, see translator Beekman’s detailed introduction in Volume One and lively footnotes throughout.)

Rumf took up documenting natural history on the island of Ambon. His herbal includes descriptions,  medical uses and cultural lore on plants from pomegranates to the tree of blind eyes. He persevered despite going blind himself in his early 40s, losing his wife and a daughter in an earthquake and tsunami, and then losing all his drawings when his house caught fire. He had the drawings redone and five years after the fire sent half the manuscript to Europe. The ship carrying it sank.

In 1697, after 37 years of work, Beekman estimates, the manuscript reached company headquarters. The company, concerned about trade secrets, forbade publication. The volumes were eventually published, in Dutch, beginning in 1741.

Beekman, a Dutch scholar, died before his translation was published. He deserves a toast, as does the remarkable Rumf and — why not — all who have struggled to reach the end of that faraway last sentence.