For a century, America was the world’s biggest producer — and user — of petroleum. Today, the country remains the biggest user while supplying less than 7 percent of world demand. Although this book is nominally about the 2010 BP oil spill, it’s really a primer on the oil industry: where it started, the companies and regulations it spawned, and how it has seduced nations everywhere to think and act as if they can’t live without it. 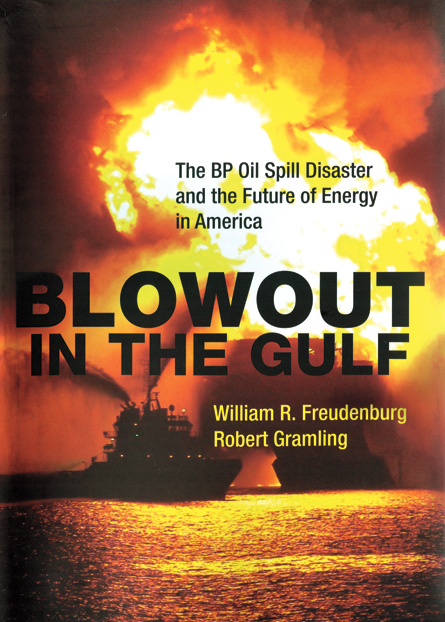 The authors sifted through mountains of news accounts, reports and transcripts of hearings on the BP spill. They’ve woven statistics, quotes and observations into a riveting account of the accident, as well as the track record of the principal parties and the largely unfettered environment in which they were allowed to operate. Taken together, the evidence suggests that the April 20 blowout — or one like it — was just waiting to happen.

But that’s just a teaser, really. Two-thirds of the text focuses elsewhere — on the perpetual cycles of boom and bust that have defined the birth and ascendancy of the oil industry, and especially that component of it that extracts crude through offshore drilling.

Although today’s generations were nurtured on the notion that oil is a limitless resource, it’s really quite finite, Freudenburg and Gramling point out. And it is being mined so rapidly that there simply isn’t enough to fuel the globe at current rates for much longer.

Freudenburg, an environmental scientist, died shortly after this book was published, and it encapsulates his career-long effort to use environmental science in society’s service: to understand and, most important, to prevent man-made disasters. Indeed, he and Gramling argue that Ben Franklin’s adage “a penny saved is a penny earned” should apply “thousands of times over for a barrel of oil.”