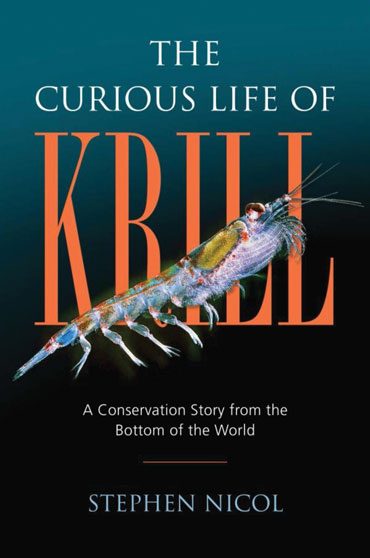 Stephen Nicol is here to change your mind about krill: They’re not microscopic and they’re far from boring. The biologist is so sick of people misunderstanding his study subjects that he’s even gotten a (slightly botched) krill tattooed on his arm to help enlighten strangers.

In The Curious Life of Krill, Nicol is taking his mission to an even bigger audience. The book is an ode to Antarctic krill (Euphausia superba), which are among the most abundant animals in the world by mass. Each several centimeters long, krill cloud the ocean in swarms that can span 20 kilometers. They’re a linchpin of ocean ecosystems — a key food source for whales, penguins and other marine life. And yet, Nicol points out, few people would be able to identify these translucent, red-and-green-speckled creatures with feathery appendages.

Anyone who has ever nurtured an affection for a species that others find odd or distasteful or unremarkable will understand Nicol’s devotion. His wry and earnest way of describing krill and their ecology will probably draw in those interested in biology or environmental science.

As one of the world’s leading experts on krill, Nicol offers an insider’s view of the political negotiations over krill fishing in the Southern Ocean. And yet the book’s conversational (sometimes slightly rambling) style makes you feel as if you’re part of an engaging dinnertime conversation. Nicol chronicles the challenges of estimating krill populations and of studying the complex behavior of an animal too small to tag or track. And he shares plenty of delightful anecdotes. At one point, for instance, his lab amassed the world’s largest collection of whale poop to study whether the cetaceans could fertilize the surface ocean by recycling the nutrient iron picked up through the krill they ate. The answer: probably yes.

The book tackles tougher subjects, too. Nicol delves into the threats that Antarctic krill face from fishing — the animals are gathered up for aquaculture feed and also ground into extracts and powders for dietary supplements and medical research — and describes efforts to regulate the industry. He ponders how krill may fare in warming oceans. The critters are resilient, he says, but it’s not clear how quickly these animals, which are known to live as long as about a decade, will adapt to rapidly changing sea temperatures.

Buy The Curious Life of Krill from Amazon.com. Science News is a participant in the Amazon Services LLC Associates Program. Please see our FAQ for more details.