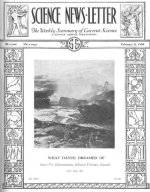 Regularly established and equipped volcano observatories are relatively few, for the business of watching volcanoes, unlike the related business of watching the weather, is a comparatively new science and has yet not developed a large trained personnel. The United States has only one volcano station, in spite of the fact that this nation owns more active volcanoes than any other–mostly in Alaska and the Hawaiian Islands. Very fittingly, however, this observatory has been built on our biggest crater, which is also the biggest active crater in the world, Kilauea.

Our observatory on this holy mountain of the ancient Kanakas is called, simply and appropriately, Volcano House. Here Dr. Thomas A. Jaggar and his assistants spend their nights, when they are not actually down in the bottom of the crater itself, holding witches’ councils on the edge of the huge fire-pit of Halemaumau, where the real fiery activity of the volcano is centered.

The skull of Sinanthropos pekinensis, or ancient Man of Peking, turns out to be no million-year-old ultraprimitive human type but apparently a comparatively recent and certainly a high-type Neanderthaloid cranium. This is the gist of the opinion of Dr. Ales Hrdlicka, noted anthropologist of the U.S. National Museum, given to Science Service after he had examined a profile photograph of the much-controverted fossil sent him by Dr. Davidson Black of Peking Union Medical College, whose field work has resulted in the discovery of this new find of prehistoric man in China.

Each countryside will have an organization of snow fighters, ready like a city fire department to get out on short notice day or night, if the plans outlined in a report to the American Road Builders’ Association are carried out.

“Success depends on catching the snow before it is too deep or packed solid by traffic,” the report explains. “Work should proceed on a definite plan and each man know his duties. The important roads should be opened up first. At the beginning of the snow season, equipment should be placed at strategic points for snow removal.”

Prevention of drifts is the greatest part of the program of snow-fighting. Engineers find that anything that causes a reduction in the velocity of the air carrying the snow will cause drifts, and recommend various measures from cutting weeds along the edge of the road to changing the location of the road itself, if topographic features nearby cause the snow to pile up unavoidably on the highway.

Temporary snow fences to make the snow drift in harmless places are found very efficient if carefully placed, the committee finds, and their use supplemented by scraping with high-speed trucks equipped with straight blade plows will keep traffic moving through the winter.

“The last 10 years have seen a vast snow removal program inaugurated in the 36 so-called snow states,” says the report. “Nowhere else in the world outside of cities is there anything to compare with it. The chief reason is found in the fact that the 22 million people living in these states own two-thirds of all the automobiles in the world.”