The first up-close look at artificially triggered tremors suggests seismicity caused by human activities starts slow before shaking things up. The finding could help scientists better understand, and possibly even stem, the rising rate of earthquakes near sites where unwanted fluids, such as gunky water left over from fracking, are injected underground.

Researchers triggered and studied earthquakes along a seismic fault that runs beneath a repurposed Cold War-era military base. As pumped-in water pressurized the rock, the fault slowly slid without causing any seismic activity. After a while, this slipping spawned earthquakes at spots away from the water injection site, suggesting that the quakes were only an indirect effect of the fluid injection, the researchers report in the June 12 Science.

If the newly observed slow sliding could be carefully monitored, the fluid injection rate could possibly be tweaked to avoid triggering earthquakes, François Cornet, a geophysicist at the University of Strasbourg in France who was not involved in the study, writes in an accompanying commentary. “If you could detect this nonseismic slip, then you can reduce or completely stop your fluid injection without getting a significant seismic event,” he says. “But if you just pump like crazy, the slip will keep going and you’ll get some seismic events.”

Earth’s depths have become a popular place to stash watery waste such as municipal wastewater and, increasingly, used fracking fluid trucked in from faraway wells. While most quakes linked to injection wells are imperceptible without a seismometer, a growing number are intense enough to rattle the surface. The rate of magnitude 3 or stronger earthquakes in north central Oklahoma, for instance, has recently increased nearly 300-fold (SN: 8/9/14, p. 13). Scientists worry that injection wells could trigger even larger quakes, but don’t have a good handle on the physical processes that lead from fluid injection to ground shaking. 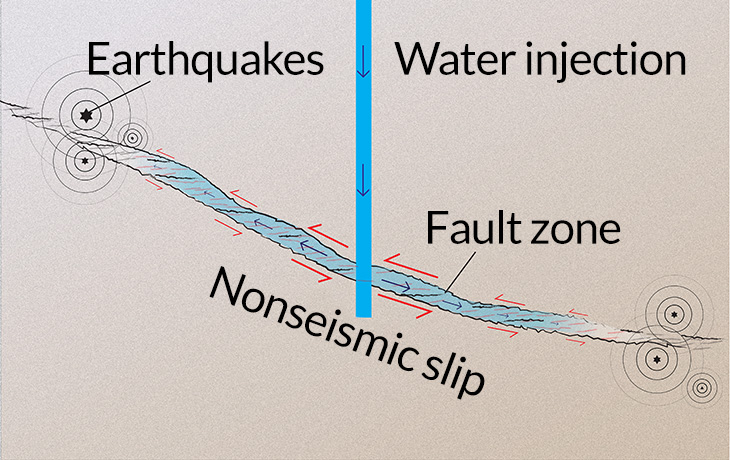 This diagram shows how water pumped into a seismic fault triggered smooth slipping near the injection site and small earthquakes farther along the fault. The slipping may be responsible for building up the stress that provoked the quakes, researchers propose.

Geoscientist Yves Guglielmiof Aix-Marseille University in France and colleagues went underground to get up close to their induced tremors. An underground research facility in southeastern France sits over a roughly 500-meter-long fault where two rocky slabs grind against each other. The researchers drilled straight down to a depth of 282 meters into the boundary between the two sides of the fault and pumped in 950 liters of water.

As the water pressure in the fault built up, the fault slowly slipped at about 4 millionths of a meter per second without producing any seismicity. Around 18 minutes into the experiment, the first earthquakes rumbled, but not from the injection site. Most of the approximately 80 induced microearthquakes originated at least a few meters away along the fault in both directions where the pumped-in water hadn’t reached.

“Seismicity is only a small part of the failure of the fault,” he says. “I’d say it’s about 80 percent this slow slip and 20 percent seismicity, so it’s critical to monitor both.”

While the new research marks progress toward understanding and monitoring accidentally induced rumbles, the safest strategy for now is to “sidestep the problem altogether,” says study coauthor Derek Elsworth, a geophysicist at Penn State. “If you can avoid failing the fault in the first place by limiting the flow of fluid, you don’t have to worry about whether the failure will cause seismicity,” he says.