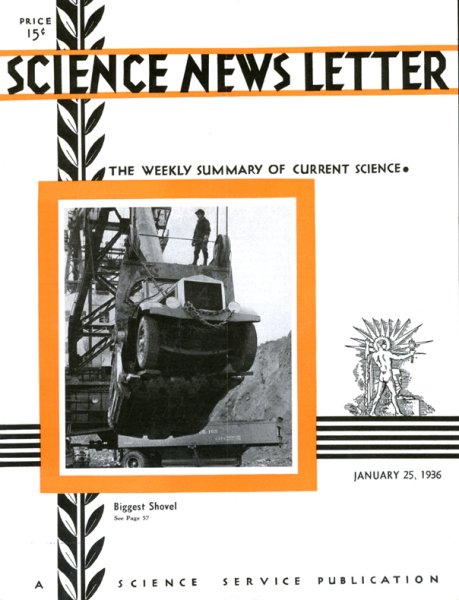 One of the largest scoop shovels in the world, weighing 2 million pounds and towering as high as a 14-story building, is in operation at strip coal mining operations at Seelyville, Ind.

Coupled with the mining operations are giant motor trucks and trailers that haul 30-ton loads of coal; so huge and heavy are they that they are not permitted on public highways and can be used only on the company’s grounds.

The illustration on the front cover of this week’s Science News Letter shows the shovel in the act of lifting the huge truck. In 1930, a 320,000-pound steam shovel with 20-cubic-yard scoop capacity, then the largest in the world, was pictured on the cover. (See SNL, Jan. 18, 1930).

Strip mining is employed in regions where coal beds lie relatively near the surface. The topsoil or caprock covering the coal bed is stripped off by shovels, and the actual coal mining is of the open-pit type. At Seelyville, a bed of high-grade bituminous coal is being exposed which, it is expected, will keep the gigantic equipment busy for the next 15 years.

Movable under its own power on caterpillar treads, the shovel clears a path 75 feet wide for itself as it moves over the buried coal bed. From the giant, 140-foot tower, the shovel, with a capacity of 30 cubic yards, can lift material and dump it as much as 215 feet away, and can deposit it on a pile as high as 70 feet.

Biological research, including the study of cancer, as well as physical science should benefit in the experimental program to be undertaken with the newest of all atom accelerators, just put in operation at Cornell University by Dr. M. Stanley Livingston, instructor in physics. Particles with 2 million electron volts energy can be generated with the device.

Eastern leadership in the field of the conquest of matter is assumed by Cornell, states the university announcement, with the new device which is patterned after the famous 85-ton cyclotron equipment of Prof. E.O. Lawrence of the University of California.

Dr. Livingston was a coworker of Prof. Lawrence in the design and construction of the West Coast apparatus, which has done so much for increasing knowledge of artificial radioactivity, the production of penetrating neutrons, and studies on the transmutation of the chemical elements.

Besides investigations into the structure of the nuclei of atoms, it is planned to use Dr. Livingston’s Cornell apparatus to test on mouse cancers the effects of neutrons that it will generate. This research will be conducted in cooperation with the New York State Institute of Malignant Diseases at Buffalo, N.Y.

Plants can be made to grow bigger, producing a larger seed yield, by “stuffing” them with carbon dioxide, the atmospheric gas that they use as initial raw material in food-making, Dr. Earl S. Johnston, of the Smithsonian Institution, has determined in a series of laboratory experiments.

Dr. Johnston grew wheat plants in open-topped glass enclosures, in which he maintained the carbon dioxide content at four times its usual percentage in the air. The plants produced more stalk and larger and more-numerous heads than did similar plants in neighboring glass cages where only ordinary air was used.

As yet, Dr. Johnston’s results, like somewhat similar results obtained in European experiments, have no practical application, since the cost of raising the carbon dioxide content of the atmosphere under ordinary field conditions is much greater than the increased yields thus obtainable would justify.