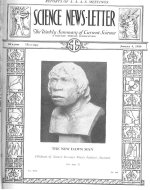 The ape-man of Darwin was read out of

man’s family tree and the dawn-man of

elevated to the position of man’s progenitor

the American Museum of Natural History,

A new picture was painted by Dr. Osborn of

the earliest known creature who can be

His size of brain was equal to the minimum of that of the living Veddahs,

Papuans, and native Australians, the most primitive living men. He

animals perfected a slingstone. He lived contemporaneously with a very

primitive species of elephant whose remains are found from India to

Africa to England and he hunted this beast for its flesh, bone, and ivory.

forebrain. He was a nomad and long and agile lower limbs were his only

means of distant transportation. He was a dweller of the open plains, not

of “warm, forest-clad land” as was Darwin’s “hypothetical ape” human

ancestor. He lived near the end of the geological period of time known as

the Tertiary, in the epoch called the upper Pliocene, which was certainly

more than one and a quarter million years ago.

MYSTERY OF THE B STARS EXPLAINED

Rotation of the galaxy–the system of stars of which the sun, the Milky

center, helps explain the peculiar motions of the bluish-white stars

classified as type B. This announcement was made by Dr. J.S. Plaskett,

director of the Dominion Astrophysical Observatory at Victoria, B.C.

Dr. Plaskett explained that the stars of type B, which are classified by

the lines that appear in their spectra when their light is analyzed, all are

spectral type. But the curious fact has been found that most are moving

from the sun, as if the whole system of these stars was expanding

around the sun as a center. The average speed away from us is about

Though various suggestions have been made to account for this

anomaly, such as errors of measurement, Dr. Plaskett has found that

“A systematic study of the properties of bacteriophage failed to

bacteriology at the Washington University School of Medicine. The

evidence seems to indicate that the bacteriophage is an inanimate

chemical product of bacterial metabolism, having no cell-dissolving

properties of its own, Dr. Bronfenbrenner said.

Bacteriophage has been hailed as a most potent germ-killer, being made

itself from germs, but ever since its discovery by Dr. F. d’Herelle it has

been a subject of scientific controversy.