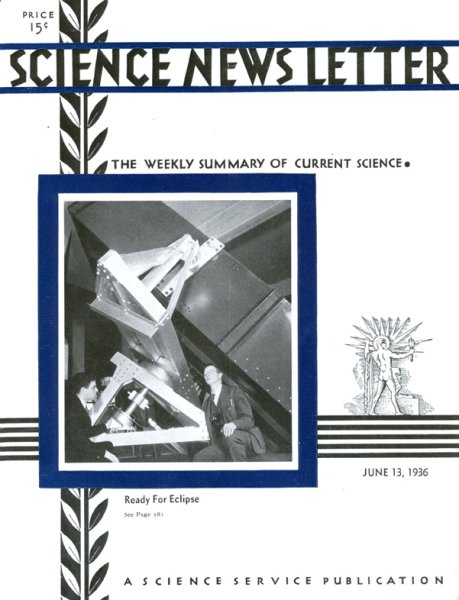 The giant camera shown on the front cover, one of the largest spectrographs ever built, will be used by the joint Harvard-Massachusetts Institute of Technology expedition to observe the total eclipse of the sun on June 19, from a special station at Ak-Bulak, Siberia. The Instrument is made of dowmetal, 96 percent magnesium and 4 percent aluminum, an exceptionally lightweight alloy. The entire spectrograph box, 12 feet by 3 feet by 5 feet, with its complex mountings, weighs less than half a ton. Dr. Donald H. Menzel, director of the expedition, is at the right while Henry Hemmendinger, Harvard graduate student who will be a member of the party, is at the left.

The box will house four plane gratings, polished metal surfaces ruled with 15,000 lines to the inch, which will be used, each with a separate lens and camera, to photograph the crescent of the eclipsed sun and the corona in lights of different wavelengths, ranging all the way from the ultraviolet to the infrared.

Contenders in Olympic fencing matches this summer will not have to depend on the quickness of the human eye to judge the points they score. Their own weapons, electrically connected to a device that announces each “touch,” will tell their own story. (Umschau, May 24)

The point of each foil will carry a small, concealed electrical connection, held open by a spring. When a “touch” is scored, the connection is momentarily closed. A light cable, led up the fencer’s arm and out through the back of his suit, winds and unwinds from a reel behind him, as he retreats and advances. Through this cable the electric announcement of the point is carried to an apparatus on the judges’ table, which lights two lamps and rings two bells.

According to Olympic fencing rules, a counter-thrust made within a twentieth of a second of a successful thrust by one’s opponent is not counted. The apparatus accordingly is so arranged that after the circuit has been closed it cannot be made to register again until the required twentieth of a second has elapsed.

Fencers in practice have declared themselves very little hampered by being thus “wired for touch,” and they are willing to accept the arrangement because it eliminates any possibility of doubt or dispute over the troublesome twentieth-second rule.