Beneath its glossy veneer, Europa’s frozen crust might be carved into something resembling Swiss cheese, with enormous cavities of liquid water tucked into the rock-hard ice.

One of the buried lakes on Jupiter’s watery moon, lurking a few kilometers below a region called Thera Macula, contains at least as much water as the U.S. Great Lakes, scientists report online November 16 in Nature.

These hidden Europan reservoirs would explain jumbled, chaotic surface features that have puzzled scientists for more than a decade. The existence of such cavities implies vigorous mixing of materials between Europa’s frigid surface and the sloshing ocean hiding beneath — a tantalizing prospect for scientists considering whether life could evolve on the jovian moon.

“It would be great if these lakes harbored life. But even if they didn’t, they say that Europa is doing something interesting and active right now,” says planetary scientist and study coauthor Britney Schmidt of University of Texas at Austin.

Schmidt and her colleagues uncovered the lakes while considering how chaotic regions on Europa, such as Conamara Chaos, might form. The team compared archival images of these tangled terrains with similar landforms on Earth: fractured, collapsing Antarctic ice shelves and icy caps perched atop subglacial Icelandic volcanoes. Interacting water and ice craft these terrestrial jumbles, and similar processes can explain observations on Europa.

The team “took an array of related processes and shuffled them in new, extraterrestrial ways,” says glaciologist Ted Scambos of the National Snow and Ice Data Center, who likens Europan chaos-crafting to an “upside-down-cake” version of earthly events.

On Europa, warm, pure ice rises through the crust, eventually reaching a contaminated layer within a few kilometers of the surface. That dirty layer then thaws, forming a lens-shaped lake, and cracks the weakened ice above it. Then, water pushing up through the cracks fractures and rearranges the surface on top. “Fracturing catastrophically disrupts the ice in the same way that it causes ice shelves to collapse on Earth,” Schmidt says.

Busted-up regions like Conamara and Thera Macula cover roughly 50 percent of Europa, meaning that the moon’s crust might host many enormous lakes within a few kilometers of the surface. Preliminary estimates suggest that the pocket beneath Thera Macula could remain liquid for as long as 300,000 years. And if the earthly comparison holds, these chaotic regions could be forming quite quickly. “On Earth, when an ice shelf collapses, it takes hours to days to weeks for the main event,” Schmidt says. “But the ice shelf continues to evolve for months, even years afterwards.”

The team’s hypothesis merges two conflicting theories explaining these puzzling terrains, says Robert Pappalardo, a planetary scientist at the Jet Propulsion Laboratory in Pasadena, Calif. “It’s a very exciting model that seems to explain most of the observations as we understand them,” he says. The watery cavities could be potential targets for a future life-seeking lander, but Pappalardo says scientists need to pinpoint exactly where the buried lakes are. “We want to go to some place that’s been in recent contact with water below, so we can test whether there’s life there today,” Pappalardo says.

The lakes might boost Europa back into the extraterrestrial spotlight, since they imply that the moon is actively sending materials from the surface — such as oxygen — into its ocean, potentially seeding the depths with compounds needed for life. “You’re taking the surface of Europa, which is plated with whatever the Jupiter system can throw at it,  and mixing it catastrophically,” says Don Blankenship, study coauthor and geophysicist at the UT Austin. “Then putting it down a few kilometers. It’s like a washing machine.” 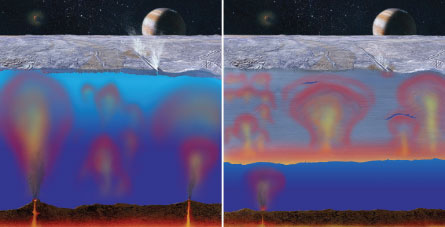 Scientists have concluded, based on images of shifting surface features and data from a magnetometer aboard the Galileo spacecraft, that Europa hides a liquid ocean beneath its icy crust. But just how thick the outer ice layer is remains a mystery. Some researchers think it could be just a few kilometers deep (left) — thin enough for the ocean, which may be kept liquid by tidal heating, to reach the surface through fissures in the frozen material. Other scientists favor a thicker rind as much as 30 kilometers deep (right), which would transfer heat to the surface in plumes of flowing ice. Scientists also hypothesize that hydrothermal vents might heat the oceans from below and provide a suitable environment for life.