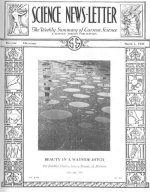 BEAUTY IN A DITCH

Among the photographs that attracted much attention at an exhibition of the London Salon of Photography not long ago was one that stood out as a gleaming example of the beauty to be found in common things–even in ugly things–by a sufficiently discerning eye. S. Uyeda saw a lot of big, round oil spots floating on the top of a wayside ditch, the interspaces pebbled with smaller spots. He set his camera down close to the ground, to flatten the circles into ellipses, and to increase the illusion of an arrangement of the big spots into rows. Result: a prize photograph.

RADIO TO BRING SAFETY TO AVIATION

Governmental requirements for the use of radio on all passenger airplanes, similar to those in effect at present for ocean ships, are seen in “a matter of months” by Herbert Hoover, Jr., radio engineer with the Western Air Express, in a paper that he presented before the meeting of the Society of Automotive Engineers. Radio is essential to the continued success of air transportation, he said.

Strange tantalum, the metal rarer than gold that absorbs 740 times its volume of hydrogen gas, successfully resists attack by the strongest mineral acids and changes alternating into direct current, is finding greater use for dental instruments, surgical tools, pen points, hypodermic needles, and acid- proof pumps, Prof. George W. Sears, of the University of Nevada, reported recently to the American Institute of Mining and Metallurgical Engineers.

Even though tantalum was used for electric light filaments in 1906, until the past few years it has been only a rarity. It forms a much smaller portion of the earth’s crust than gold, it is estimated. The production in 1928 was 35,000 pounds.

Although there are other substances that, when used as an electrode of an electrolytic cell, permit the passage of electricity in only one direction, tantalum is the best, said Prof. Sears. Electrolytic rectifiers for charging storage batteries contain it.

“Aqua regia, which readily dissolves both platinum and gold, has no action on this metal,” continued Prof. Sears.

Hydrofluoric is the only acid successful in attacking it. Strong alkalies have no effect on it.

Tantalum can be cold-rolled to a sheet one-thousandth of an inch thick. It is found in the Black Hills of South Dakota and in Australia.