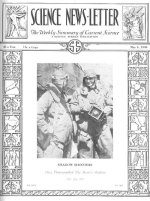 Clouds over the sun broke away at Camptonville, Yuba County, California, two minutes before the total phase of the solar eclipse of the sun. Only the lightest haze remained, and the observations planned by the various expeditions located there were carried through successfully.

The Lick Observatory-Crocker expedition under the direction of Dr. J.H. Moore secured photographs of the spectrum of the solar atmosphere with two powerful spectographs fitted with plate holders moved by accurately tuned screens driven by motors to secure perfectly uniform speed. One spectograph recorded the spectrum in the violet-blue region from 3900 to 4650 Angstrom Units; the other, the spectrum in the orange-red region from 4861 to 6563 Angstrom Units. Both plates when developed proved to be in perfect focus. It will, of course, require months of careful study to interpret them fully.

Although the shadow that passed was only about 3,000 feet wide and was supposed to be subject to a possible error of nearly 1,500 feet, the photograph of the corona taken with three cameras, one at the center, one at the northwest, and one near the southeast edge of the computed path, show that the actual path agreed closely with the predicted one as corrected by the latest computations. Since the duration of the totality was but 1 second, these photographs of course give but little indication of the form of the corona. The times of second and third contact were accurately recorded with the aid of a short wave-length receiving set and a chronograph, thanks to the cooperation of the officials at the Naval Observatory at Mare Island who sent out a special set of signals.

Cosmic rays, the invisible visitants from outer space that have been interpreted by Dr. R.A. Millikan as heralds of the creation of matter out of errant energy, do not come as steady, undulating streams after the manner of the older concept of light rays, but as separate, high-velocity particles, like tiny bullets.

This concept of the nature of cosmic rays has received support from the work of Dr. L.F. Curtis of the U.S. Bureau of Standards, reported before the recent meeting of the American Physical Society.

Dr. Curtis placed two electron counters, instruments adapted for the detection of the swift passage of these almost infinitely small, electric particles, one above the other. Between the two he inserted the poles of a powerful electro-magnet. It has long been known that electrons and other electrically charged particles can be pulled from their course by a magnetic field, and Dr. Curtis reasoned that if the cosmic rays were corpuscular in their nature, he should be able to deflect them after they had struck and registered in the first electron counter and before they had made contact with the second.

This occurred. When the electro-magnet was not in operation, the two electron counters would frequently register at practically the same instant. This was taken to indicate the impact of the same particle, as it passed through the two instruments successively. This interpretation was first applied by two German workers, Walther Bothe and Werner Kolhörster-the latter, one of the pioneers of cosmic ray research.

But when Dr. Curtis turned on the current in his electro-magnet, the number of simultaneous registrations by his two electron counters was materially reduced, thus constituting a demonstration of the existence of a corpuscular radiation of very high energy.

One of the outstanding puzzles of modern physics–how electrons, once thought of as material particles, can behave sometimes like waves, while “waves” of light sometimes behave like particles–was discussed at the meeting of the American Philosophical Society by Dr. C.J. Davisson, of the Bell Telephone Laboratories. One result has been that the physicist no longer tries to imagine a model of every physical phenomenon.