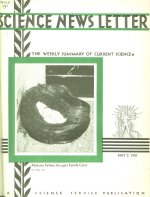 One of the big pythons in the U.S. Zoological Park recently celebrated her transfer to the more comfortable and homelike quarters of the new reptile house there by laying a clutch of 20 eggs.

The picture on the cover of this issue of the SCIENCE NEWS LETTER shows her exercising the serpentine version of maternal care: most of the time, as a matter of fact, the eggs are kept quite invisible beneath her coils. The eggs, like many reptile eggs, have tough, parchment-like shells rather than the hard limy coverings characteristic of bird eggs.

PARENTHOOD SEEMS TO DEPEND ON INORGANIC MANGANESE

Studies indicating that the formation of a hormone by the pituitary gland is in some way related to the manganese of our daily diet were described by Dr. E.V. McCollum of the Johns Hopkins School of Hygiene and Public Health at the meeting of the National Academy of Sciences in Washington last week.

Dr. McCollum pointed out the relation of iodine to the thyroid gland, of calcium to the parathyroid glands, and said that apparently another glandular system had been linked with an inorganic element which is essential to the diet.

Rats which are deprived of manganese exhibit strange behavior and bodily changes, Dr. McCollum and his associate, Dr. Elsa Orent, found. The sex glands of the male rats degenerate until complete sterility results. The females, however, continue to have litters of living young but do not show any sign of ordinary maternal solicitude.

“The mothers do not build a nest or collect their young or hover over them, and the stomachs of day-old young never contain any milk, and the young die from neglect,” Dr. McCollum reported. “These mothers not only decline to nurse their own young but will not care for foster young from the stock colony.”

PRESSURE OF SUNLIGHT STRONG ENOUGH TO BREAK COMET IN TWO

Great outbursts of ultraviolet light from the sun may press so hard on the tail of a comet as to break it in two. This is the theory presented in Washington before the American Geophysical Union by Dr. H.B. Maris of the U.S. Naval Research Laboratory.

The curious fact that sunlight can cause such huge pressures as this is at the basis of Dr. Maris’ new theory of the irregular variations of brightness observed in comets. During periods when many sunspots are visible, the ultraviolet light streaming out from the sun may increase as much as a thousand times.

The atmosphere of a comet is transparent to visible light but strongly absorbs ultraviolet light which, because of this absorption, exerts a pressure on it. The effect on the comet is to create a strong wind in its atmosphere moving away from the sun. Thus that part of a comet that feels the pressure most may get a violent jolt when a new whirlpool appears in the sun.

Magnetic storms, those great fluctuations of the Earth’s magnetic forces, often accompany or anticipate the unusual changes in comet activity. Since the magnetic effects are known to be due to the ultraviolet surges associated with bright spots on the sun, this forms additional support for the new theory of comet behavior.