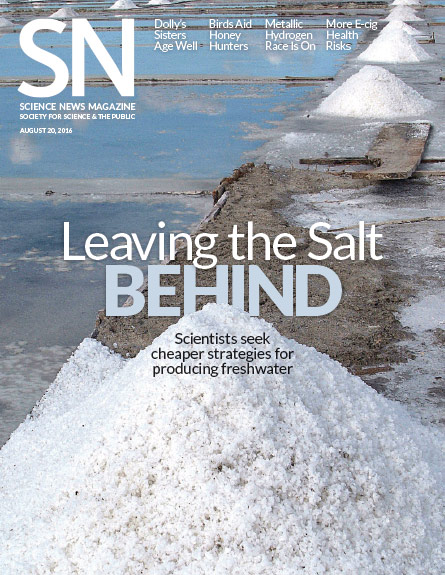 Scientists are getting closer to turning hydrogen into a solid metal, Emily Conover reported in “Chasing a devious metal” (SN: 8/20/16, p. 18).

“If, as some scientists think, [metallic hydrogen] formed under intense pressure remains solid at room temperature, why don’t we find any on our planet?” asked Michael Brostek. “If formed in a star that subsequently explodes, wouldn’t some make its way to us like other elements we have that were formed within stars?”

Reader Sallie Reynolds wondered what happens to the salt left behind.

Science News loves data and so do our readers. Take a look at the stats for three online-only stories that resonated with readers in August. 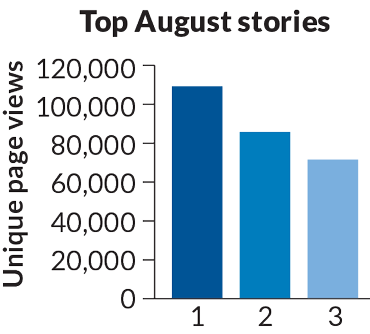 2.  A prayer for Archimedes, by Julie Rehmeyer.

Most desalination plants end up with briny leftover water that they pump deep underground (away from sources of drinking water) or dilute into a nearby water source, such as the ocean. But some facilities extract salt crystals from the desalination leftovers using evaporation ponds. In solid form, the salt can be stored, transported or dumped at landfills. “This salt could potentially be used for industrial
purposes, such as glassmaking, tanning, metal refining and cement manufacturing,” Sumner says. “The downside of evaporation ponds is that you need a lot of available space and a relatively warm, dry climate.”

The sun’s magnetic field rises to the surface no faster than about 500 kilometers per hour — the same speed that gas rises and falls within the sun. Moving gas may help guide the field, Christopher Crockett reported in “Gas steers sun’s magnetic fields” (SN: 8/20/16, p. 5).

Mary Jane Knox wondered whether planets, moons and other celestial bodies in the solar system might contribute to the formation of sunspots and other solar activity: “Could they be reflecting the sun’s rays back on it causing hot spots which might allow the eruption of the magnetic fields?”

Planets don’t have anything to do with dark spots on our sun, Crockett says. Sunspots, which are cooler than the surrounding gas, are caused by strong magnetic fields that prevent hot gas from bubbling up to the surface. “Planets were once considered culprits,” he notes. In 1972, aerospace engineer Karl Wood calculated that periodic planetary alignments seemed to correspond to upticks in sunspot activity. But later work showed no link.

For other stars, planets may play a role in boosting solar activity. Some stars host planets roughly the size of Jupiter on very tight orbits. Magnetic fields from a few of these worlds appear to trigger hot spots on their parent stars.