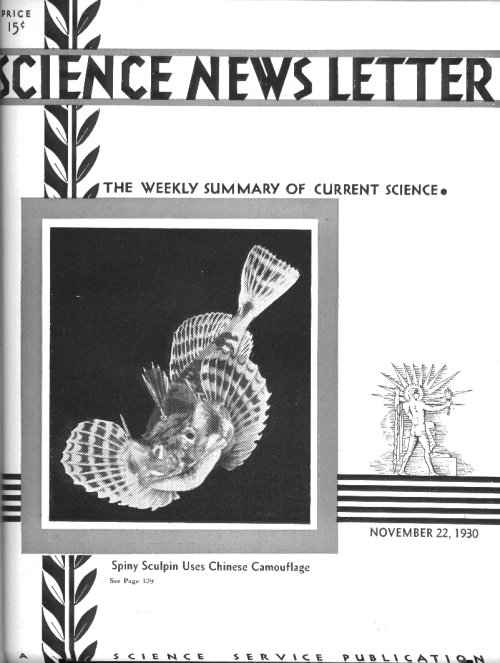 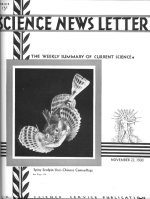 Citizens of the American midlands will soon have an opportunity to become acquainted with one of the world’s most fantastic fishes, when a group of long-horned sculpins, captured by staff members of the Marine Biological Laboratory at Woods Hole, Mass., is placed on exhibition at the Field Museum of Natural History in Chicago.

Though looking like an Oriental dream-dragon, the long-horned sculpin is a native of home waters, being found along the Atlantic seaboard from Long Island to the Gulf of St. Lawrence. Ordinarily, it does not display its full armature of fins and spines, but when disturbed or angry, it spreads itself out as wide as possible, grins fiercely at its opponent, and in general comports itself like an old-time Chinese soldier of the “false-face” school. It is not all bluff, either, for the long spines can inflict painful wounds on unwary fingers. The sculpin has a further protection in its chameleonlike ability to change color and fade into its background of rocks, barnacles, or seaweed.

PILOT CAN NOW LAND HIS PLANE WITHOUT SEEING THE FIELD

Aviators can not only fly from city to city without ever seeing the ground, but now it is possible for them to make a perfect landing on a field completely enveloped in the densest fog, that not even the most powerful light beacon can penetrate. That is, they can do so if their plane and the field are equipped with the newest radio apparatus developed by the Bureau of Standards. By experiments made at the College Park airport, near Washington, H. Diamond and F.W. Dunmore, two of the Bureau’s radio engineers, have developed the new system.

Two radio sets are used. One is the same set used for receiving the powerful radio beacon signal in flying between cities. This is also used for the reception of spoken orders, and other signals received with head phones. For landing at the proper angle, an ultrashort wave receiver is used, as the signals for this are of about 3 meters wave length, or 93,700 kilocycles.

The dairy farm has joined the industrial revolution, and now cows are bathed, relieved of their milk, and sent back to their barns by automatic machinery that resembles the constantly moving assembly line of a large automobile factory.

A rotary combine milker, or “rotolactor,” just put in commercial use for certified milk production at the Walker Gordon Laboratories farm or “milk factory” near Plainsboro, N.J., milks 50 cows simultaneously with less cost, greater speed, and less danger of contamination of milk than the old method of individual milking practiced for centuries.