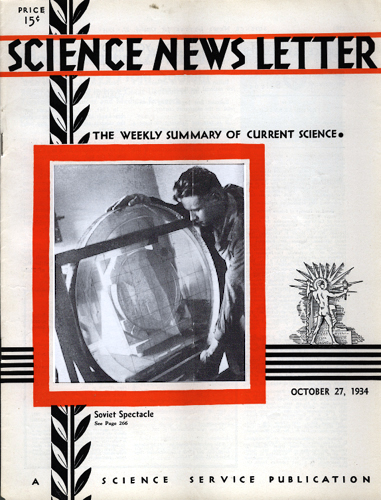 Scientists of Soviet Russia are entering the field of telescope-lens construction. The cover illustration of Science News Letter this week shows a technician examining an 82-centimeter (nearly 33 inches) diameter lens.

Largest of the world’s refractor telescopes is the 40-inch-diameter lens instrument of Yerkes Observatory of the University of Chicago. The 33-inch lens of the Soviet scientists, therefore, is an undertaking of the first magnitude.

Ultimate location of the lens will be in Pulkovo Observatory.

Prices asked by optical firms in Europe for the casting of the large piece of glass led scientists at the Optical Institute of Leningrad to undertake the job themselves.

Discovery of a way to make the common element sodium give out the world’s most penetrating gamma rays by artificial means was announced at the University of California. The radiation, it is believed, will have great usefulness in medicine for the treatment of diseases like cancer and in a study of how radiation acts on living tissue.

Prof. Ernest O. Lawrence, who made the discovery, declared: (Physical Review, October 20) “In the biological field, radio-sodium has interesting possibilities that hardly need be emphasized here.”

A chemical released in certain nerves of the body every time a thought commands the nerve to move a muscle was described by Sir Henry Dale, director of Britain’s National Institute for Medical Research. Sir Henry spoke at Indianapolis, Ind., at the dedication of Eli Lilly and Company’s new research laboratories.

The message-carrying chemical is acetylcholine. Few people have ever heard of it. Yet it is the chemical that carries messages from some nerves to muscles. This performance was suggested by several researches in past years but the reality of the effect is only now being recognized. The theory contends that almost infinitesimal amounts of this chemical are released whenever there is a thought that commands a nerve to order a muscle to move.