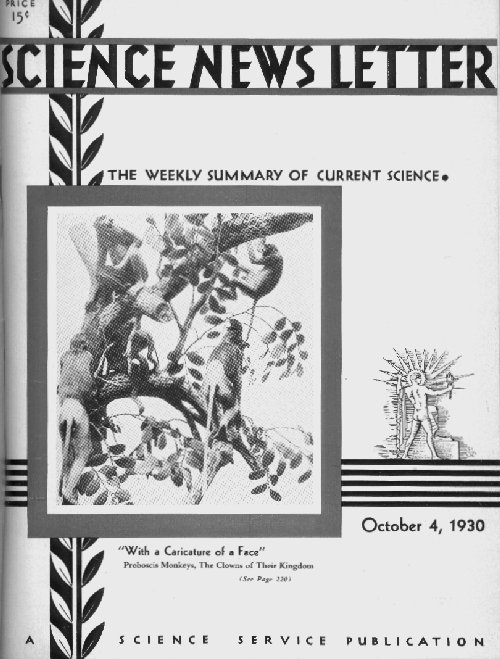 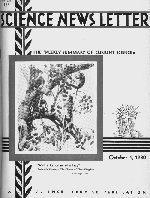 BORNEO MONKEYS IMITATE MEN WITH BOTH NOSE AND VOICE

One of nature’s most striking living caricatures is the proboscis monkey that lives in the deep forests of Borneo. A group of these creatures shown as they appear in their home among the branches of a pongyet tree is on exhibition in Carl E. Akeley Memorial Hall at Field Museum of Natural History.

The proboscis monkey gets its name from its very prominent and peculiarly shaped long nose, which gives its face almost the exact appearance of certain types of low comedians who appear on the stage with false noses. Its other features are exceedingly humanlike.

The monkey is a distinct species found only in Borneo. It grows to quite large size and has brightly colored hair. In the young the nose is much less prominent, attaining its full development and grotesqueness only in the adult animals. These monkeys frequent the tops of lofty native trees and are often seen gathered in small troupes, sitting in the sunlight where there are breaks in the density of the forests overlooking the banks of rivers.

The comedy aspect of the monkeys is carried out also in their voices. They utter long-drawn-out resonant cries resembling the deep tones of a bass violin in the hands of an extremely poor player. Among the natives of Borneo the monkeys are called “blanda” and “rasong.” They are at home in the water, and often swim wide stretches of river.

In the museum group, which is a gift from Martin A. Ryerson, are four fully grown males, two females, and one young monkey.

SECOND “PEIPING MAN” SKULL FOUND TO BE THAT OF YOUNG MAN

A second skull of Sinanthropus has been recovered from material taken out of the limestone caves at Choukoutien, about 40 miles from Peiping, where the original “Peking Man” skull was discovered by a young Chinese geologist, W.C. Pei, last December.

The material containing the new specimen was removed from the site last October to the Geological Survey’s Cenozoic research laboratory, located in the Rockefeller Foundation Hospital at Peiping, and was carefully worked over under supervision of the laboratory’s honorary director, Dr. Davidson Black, who reported the discovery to the Chinese Geological Survey.

Electricity, under a pressure of 10 million volts, about the same as that of a good lightning flash, is constantly flowing from inside the sun into outside space and so “heats the solar atmosphere to incandescence in a manner precisely like the filament of an electric light is heated by the electricity flowing through it.” This is the new and startling theory that has been developed by Dr. Ross Gunn, research physicist of the U.S. Naval Research Laboratory. Dr. Gunn has discussed these implications of his theory with a representative of Science Service. A full technical report of his conclusions will shortly appear in the Physical Review.