Light that strikes a new and improved mirror is always returned to sender.

South Korean physicists have created a composite mirror, made up of about a thousand tiny reflectors, that coaxes light waves to retrace, in reverse, the paths taken by the original waves that struck it. As a result, the researchers were able to reproduce an image at the same spot where it originated, even though the initial light waves had been severely scattered on their way to the mirror. This phase-conjugation mirror, reported in a paper to appear in Physical Review Letters, is not the first of its kind but requires less equipment and preparation time than its predecessors. “It’s very simple and elegant,” says Allard Mosk, a physicist at the University of Twente in Enschede, the Netherlands.

The researchers tested their device by projecting an image of the numeral 5 through materials including a chunk of raw chicken that scrambled the light. After a short period of calibration, the mirror sent light waves that passed back through the chicken again and combined to re-create the “5.” While phase-conjugation mirrors are relegated to the lab for now, their ability to focus and unscramble light may have important medical applications.

A wall mirror manipulates light by reflection, often sending waves bounding off in a new direction. Waves coming in at an angle from the left, for instance, rebound off the mirror toward the right. But light that hits the mirror head-on bounces back to where it originated. That’s not surprising, but it’s intriguing to physicists because it exhibits time-reversal symmetry: A video of the reflected wave would look identical to a video played in reverse of the incoming wave.

Not your normal mirror 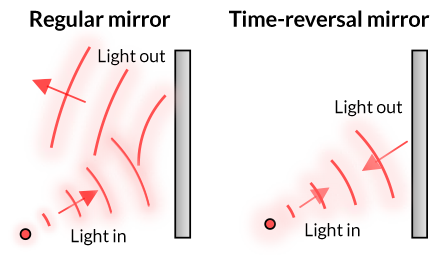 A typical mirror reflects light in the opposite direction. But a time-reversal mirror always sends light straight back from where it came, no matter what angle the light strikes the mirror.

A phase-conjugation mirror, also called a time-reversal mirror, performs this return-to-sender process regardless of the angle at which light strikes the mirror. The mirror works by reversing the direction of motion of each light wave while preserving the wave’s original shape. That’s easier said than done, Mosk says. Previous time-reversal mirror prototypes required complicated optical tricks such as firing multiple lasers to reconstruct the desired wave shape.

YongKeun Park, a biomedical optics physicist at the Korea Advanced Institute of Science and Technology in Daejeon, South Korea, and colleagues came up with a simpler solution. When the chicken-scattered light from the “5” reached the team’s mirror, a computer automatically shifted the mirror’s individual reflectors until they focused the light into a narrow beam. This signaled that the mirror was calibrated and ready to reproduce the “5.” The researchers then fired laser light that bounced off the mirror and passed through the chicken. It was like hitting a rewind button. Because the laser light re-entered the chicken exactly where the scattered light had emerged earlier, and along the same trajectories and angles, the poultry passage actually unscrambled the light. The “5” reappeared at its original location.

Mosk says he’s optimistic about the prospects of phase-conjugation mirrors for medical applications. He envisions doctors injecting a dye or other agent to make cancer cells glow inside the body. A phase-conjugation mirror would gather up that cell-glow light, even after it’s been scattered by other tissues, and send back a high-energy beam that strikes and sears only the cancer cells. “There’s reason to believe this can be done, perhaps in the next five to 10 years,” Mosk says.