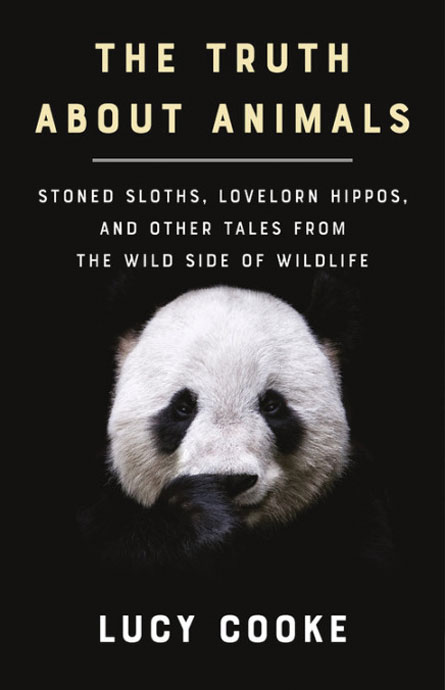 Nearly 2,000 years ago, Pliny the Elder reported that hippopotamuses find relief from overeating by piercing their skin in a hippo version of bloodletting. Eventually, scientists learned that the oozing red stuff Pliny described isn’t even blood but a secretion that may have antibacterial and sun-blocking properties. While chasing down the truth for herself, Lucy Cooke scooped the goo from a hippo and smeared it on her own skin — if nothing else, her hand was “noticeably silkier,” she writes in The Truth About Animals.

Cooke, a zoologist and documentary filmmaker, has a storehouse of such tales of animal adventure. She’s also the founder of the Sloth Appreciation Society, whose motto is “Being fast is overrated.” That motto gives a glimpse into her sense of humor, which shines through page after page, and her affinity for misunderstood creatures. Cooke battles the notion that sloths are lazy or stupid just because they’re slow-moving. In her book, she set out to, as she writes, “create my very own menagerie of the misunderstood.”

And quite a menagerie it is. Each chapter takes on a different animal — bats, storks, vultures and pandas, among others — long shrouded in myth or misconception. Some, like bats, are unfairly maligned; others are adored despite shocking behavior, such as Adélie penguins, whose sex lives were considered so depraved that, in 1915, London’s Natural History Museum boldly marked a paper about the birds’ mating behavior as “Not for Publication.”

In many cases, science created or perpetuated myths before eventually debunking them. Among the ludicrous ideas once taken as fact: Beavers escape hunters by chewing off their own testicles and dropping them as a distraction. To explain where birds disappear in winter, Aristotle once posited that they transform into different species.

Even hard-core animal lovers will find surprises in these histories. I knew, for instance, that the long-running mystery over European and American eels’ spawning sites eventually led to the North Atlantic’s Sargasso Sea (SN Online: 4/13/17). But I had no idea that Sigmund Freud was among the many who tried to solve another eel conundrum: where the fish hide their gonads. After disemboweling hundreds of eels to find their testes, Freud threw up his hands and eventually moved on to study the human psyche, perhaps slippery enough.

In the end, the history of zoology reveals as much about our human foibles as about the animals we study. And this book will leave readers more enlightened about both.

Buy The Truth About Animals from Amazon.com. Science News is a participant in the Amazon Services LLC Associates Program. Please see our FAQ for more details.