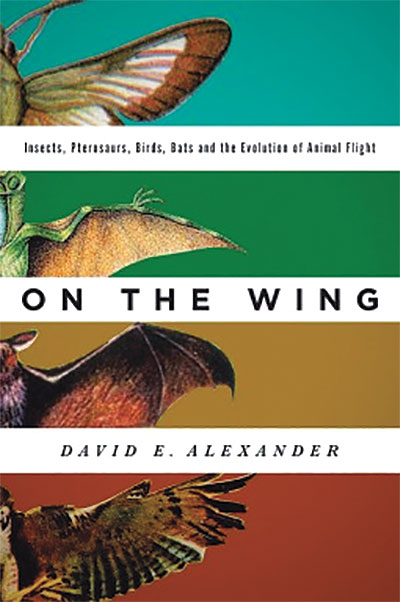 The Wright Brothers powered their way into the air at Kitty Hawk, N.C., a little more than a century ago. Like millions of humans before and since, they were inspired by myriad creatures that first took to the air eons earlier.

In On the Wing, biomechanicist David E. Alexander reviews in detail the evolution of the four groups of animals that preceded humans into the skies. The four — insects, birds, bats and the dinosaur-era reptiles known as pterosaurs — have a lot in common, Alexander notes.

The fossil record suggests that each group evolved the ability to fly just once. They all fly (or flew) by flapping their wings, but their ancestors’ first aerial excursions were probably short glides from elevated perches, either to chase prey or to escape a predator. And all fliers must keenly sense obstacles or potential landing sites at a distance, the better to avoid crashing at high (and possibly fatal) speed. That need typically translates into acute vision, Alexander writes, but bats have made do with echolocation.

Yet great differences emerge among the groups: Insects, which took to the air more than 350 million years ago, didn’t give up a pair of legs to gain their wings, while birds, bats and pterosaurs did. Another contrast: Although paleontologists have discovered fossils that chronicle the gradual evolution of birds, Alexander writes, the earliest flying members of the other groups are, for now, frustratingly absent from the fossil record.

The rules of aerodynamics apply across these groups despite great disparities in size. Evolution sculpted the animals, and their wings, accordingly. Pterosaurs, the largest creatures ever to fly, had wingspans comparable to a single-engine Cessna aircraft’s; the smallest fliers are millimeter-sized insects called thrips.

In addition to the true fliers, Alexander explores the variety of creatures that merely glide (“flying” squirrels, anyone?) and those with ancestors that once flew, such as fleas, bedbugs and ostriches. These sidelights add entertaining and informative insights into the story of flight.

Buy On the Wing from Amazon.com. Sales generated through the links to Amazon.com contribute to Society for Science & the Public’s programs.