Practical graphene
A new transistor made from thin sheets of carbon operates 30 percent faster in electronic circuits than previous transistors made of this material, known as graphene. Scientists achieved this improved performance by using a new technique for growing cleaner, imperfection-free sheets of carbon. Adding  boron nitride improved the flow of current into and out of the graphene, Tomás Palacios, an engineer at MIT, reported March 21 in Dallas at a meeting of the American Physical Society. Palacios wired up his transistor to create the first-ever graphene electrical oscillator, a simple circuit useful in building flexible electronics tough enough and cheap enough to be embedded in everyday objects. —Devin Powell 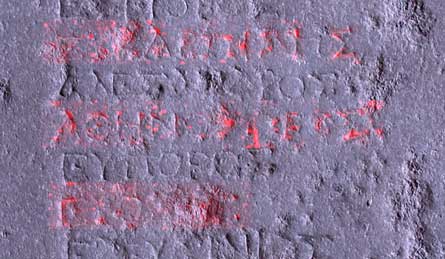 What a Lyme
Sensors made of tiny carbon tubes could provide a more sensitive test for Lyme disease, a condition that is difficult to detect in its early stages. To make the sensors, Jennifer Dailey of the University of Pennsylvania in Philadelphia chemically attached antibodies to the surfaces of carbon nanotubes. When dipped into a liquid containing pieces of Lyme-causing bacteria, the antibodies grabbed on to these microbial fragments, or antigens, changing the voltage of the nanotubes. This proof-of-principle experiment, reported March 21 in Dallas at an American Physical Society meeting, detected antigen levels 200 times higher than would be present in the human body; the researchers next plan to test the technique on more realistic concentrations in human blood. —Devin Powell

Artifacts X-rayed
Words inscribed on artifacts thousands of years ago are being read for the first time, thanks to powerful X-rays that light up seemingly invisible traces. At Cornell University, graduate student Ethan Geil uses beams of energy from a particle accelerator to map out in a fraction of second the materials present on an object’s surface. This technique, presented March 24 in Dallas at a meeting of the American Physical Society, spotted glyphs hidden under solid red paint on Mayan pottery and detected traces of the iron instrument used to carve words in an ancient Greek tablet — revealing the untold story of three brothers. —Devin Powell