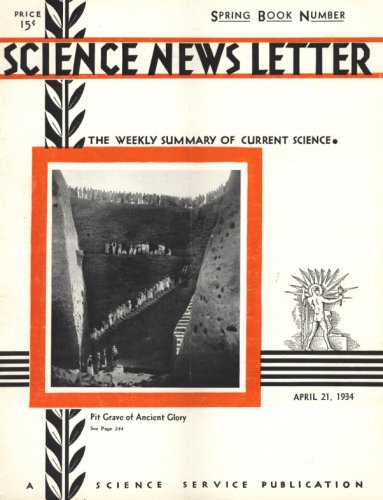 EXPLORATIONS AT UR FINISHED; CEMETERY FOUND IN PIT BOTTOM

Exploration at Ur of the Chaldees, one of the most remarkable archaeological projects ever undertaken, is finished, according to an announcement made at the University of Pennsylvania Museum.

A report just received from C. Leonard Woolley, British archaeologist, who has directed the long campaign of digging, tells of the last discovery at Ur. This discovery is a cemetery of 200 graves found in the depths of a huge pit 50 feet deep, which is pictured on the front cover of this week’s Science News Letter.

Closing a gap that has existed in the weights of the chemical elements, evidence for the existence of both hydrogen and helium of mass three has been found in Cavendish Laboratory researches at Cambridge University.

Dr. P.I. Dee reports in a communication to Nature that these hitherto unfound varieties of helium and hydrogen are created when hearts of double-weight hydrogen collide. Here are two new units of matter brought into existence by the smashing of heavy-hydrogen particles, which only 3 years ago were themselves undiscovered.

RADIO “ECHOES” FROM MOON TO BE SOUGHT BY THOUSANDS

Worldwide efforts to discover whether radio waves escape from Earth and are echoed back to it again from the moon and other distant parts of the solar system will shortly be inaugurated.

Prof. E.V. Appleton of the University of London, leading British investigator of the radio-reflecting layers of the Earth’s upper atmosphere, plans to enlist the aid of thousands of radio enthusiasts throughout the world, to time echoes of powerful special signals, which it is hoped will pass through the outer layers of the atmosphere into space and then be reflected from objects or layers within the solar system, as light is reflected from a mirror.