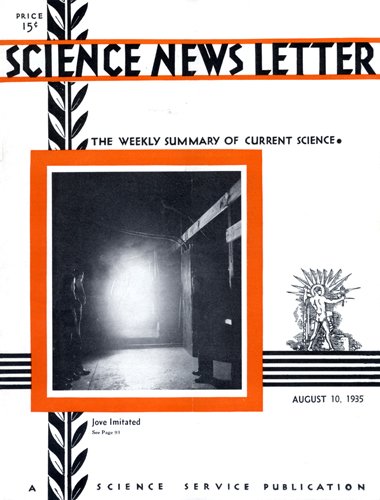 Complete lightning phenomena can now be produced in comfort in the laboratory. One artificial 100,000-ampere lightning stroke produced in Westinghouse’s Sharon, Pa., testing laboratories caused spectators to hold their ears to shut out the thunderous noise, as shown on the front cover of this week’s Science News Letter.

Engineers have developed a muffler, however, that shuts out the noise and allows observers to stand close to the lightning-current generator while it is operating.

Tests in the laboratory during the past 3 months showed engineers the futility of conventional protective apparatus and brought out the ability of the “deion gap,” a device for “snuffing out” lightning currents, to protect against even direct strokes of lightning.

Medicine has discovered the part of the brain believed to cause convulsions like those occurring in epilepsy. The convulsion-causing brain center acts like a “trigger” which, when stimulated, sets off a neurological “explosion” throughout the whole brain.

Drs. F.A. and E.L. Gibbs of Harvard Medical School described before the meeting of the International Neurological Congress at London experiments leading to the discovery of the brain trigger.

The trigger is a short-fiber system running between the frontal cortex basal ganglion and the thalamus.

Parallel research on brain tumors of cats and in man indicate, the scientists reported, that the same part of the brain is responsible for convulsions in each.

A new and unsuspected link in the relationship between light and biological activity has been discovered by Dr. Lewis H. Flint of the Department of Agriculture and Dr E.D. McAlister of the Smithsonian Institution. Discovery that a band of light waves at the red edge of the invisible in the spectrum has a powerful retarding effect on plant growth was announced as the result of their studies.

Lying at just about the point where light can no longer be seen by the human eye, the band’s growth-retarding action had not been suspected or looked for, although previous studies by Dr. Flint had disclosed the effects of certain light waves on plant growth. “Red, orange, and yellow light caused lettuce seeds used in the test to germinate, while green, blue, and violet light caused germination to lag. The effect of this inhibitory invisible light band seems to be more powerful than the entire green-blue-violet end of the spectrum, although not tested as yet on other plants beside lettuce seeds.