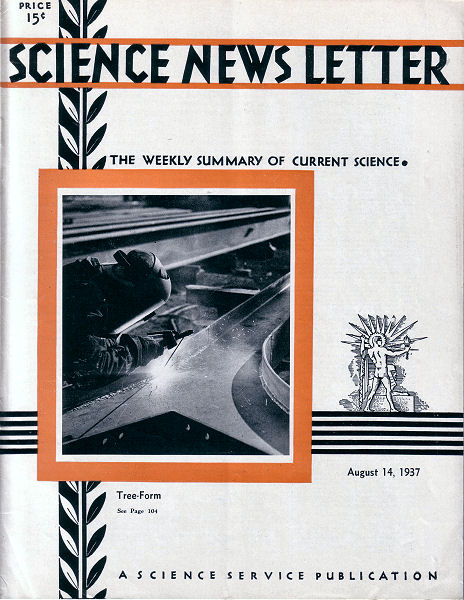 The cover picture of Science News Letter in this issue shows the welding of the new type of “tree form” columns now being applied in building construction where wide aisles, entirely free from cross members are needed. The graceful, curving columns are being constructed in the shops of the Austin Company at Cleveland, Ohio. They will be used in the new factory of the International Silver Company at Meriden, Conn., where it desired that the factory will be free from shadows and the light uniformly distributed.

A fossilized skull of a mosasaur—huge, serpentine sea-reptile which lived during the upper Cretaceous geologic period, some 60 million years ago, has been found near the town of Gustine, Calif., by Allan Bennison, a sophomore in the University of California. It is the first mosasaur skull to be found west of the Rockies.

The skull is about 2 feet long, and is 6 inches in width at its broadest point. It was found embedded in a sandstone formation on the side of a hill, just west of the town. It has been given to the university’s museum of paleontology for study.

S.P. Welles, field laboratory assistant in the museum, has informed Science Service that the reptile was about 18 feet long, with a slender, snakelike body. Its limbs resembled paddles with which it propelled its way through the water. Its tail was somewhat fanlike in shape, and served as a scull to guide its passage. In appearance, Mr. Welles said, it was a “cross between the present-day sea lion and sea-snake.”

Its habitat was the ocean. But like the whale, it had come to the surface for air. It had large, sharp teeth and probably was a fish eater.

Paleontologists at the university are planning an expedition to the region in which the find was made, in the hope of recovering the remainder of the skeleton. It is believed this will necessitate tunneling into the side of the hill, as the skull itself was found on a steep slope.

Some 2 years ago, Mr. Bennison found a dinosaur in the same region, and this discovery led him to make a careful survey of the area, with the result that he uncovered his present find.

Even though man has released into the atmosphere some 180 billion tons of carbon dioxide gas by the burning of mined fuel during the last half century, the plants of the world each year return this carbon dioxide a thousandfold through their decay or combustion.

Dr. Robert E. Wilson, president of the Pan American Petroleum and Transport Company, who reports this result (Industrial and Engineering Chemistry) also notes that the fears of those people who shudder at the “greatly” increased carbon dioxide content of the air which is produced by modern industrial activity, are unfounded.

“The average partial vapor pressure of this carbon dioxide,” says Dr. Wilson, “is probably largely what determines the average carbon dioxide content of the air, so that well over 90 percent of any excess carbon dioxide introduced into the atmosphere eventually finds its way into the ocean, leaving the composition of the former virtually unaffected.”

The chemist, points out Dr. Wilson, sometimes needs to be reminded that all his advances are really puny efforts when placed beside changes needed to make sizable alterations in the state of the Earth.

“The combined result of all our mining and chemical activity to date has made but an infinitesimal alteration in the composition of the Earth’s crust or sea water,” he declares. And this, despite the fact that in the past half century some 50 billion tons of carbon have been obtained as either coal, lignite, crude petroleum, or natural gas.

There is no fear, concludes the petroleum scientist, that chemistry and industry are, in some way, working an atmospheric transformation that might threaten human existence.