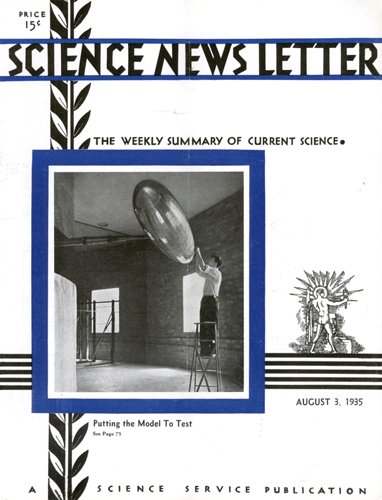 ZEPPELIN MODELS WHIRLED AT 200 MILES PER HOUR IN TESTS

A 2-ton revolving arm that hurls 12-foot zeppelin models through space at 200 miles an hour was exhibited to the experts attending the lighter-than-air craft forum at the Daniel Guggenheim Airship Institute.

The giant whirling arm—as long as the average city block is wide—is designed to make accurate tests on zeppelin models to check where the greatest strains occur in time of severe storms; times of disasters like that which caused the crash of the Akron off New Jersey.

The 12-foot-long model zeppelins, whirled round and round by the device, have 60 small holes drilled in them from the extreme nose to the tail. Separate rubber tubes are connected to each hole, and the 60 tubes run through the hollow whirling arm back to three score manometers, which indicate the air pressure at each given hole in the hull.

The long glass tubes of the manometers contain red fluids whose relative heights give an accurate picture to the research scientists of the pressure forces distributed along the model’s hull. As a final automatic touch, a photographic film passes behind the tubes and makes a permanent record of the heights at 1-minute intervals for each one-sixtieth of the model’s length.

Knowledge gained from the tests will be applied to the construction of future airships to make them more sturdy at the points where they experience the greatest strains.

Controversy reigns in the world of mathematical physics. Following Prof. Albert Einstein’s attack on quantum theory (See SNL, May 11, 1935) on the grounds that it does not give a complete description of physical reality, the battle is now joined by Prof. N. Bohr, the famous scientist of the Institute of Theoretical Physics at Copenhagen.

Prof. Bohr is one of the leading exponents of quantum theory, for certain developments of which he was largely responsible. The theory was initiated by Prof. Max Planck, and other names associated with it are those of de Broglie, Dirac, Eddington, Heisenberg, Jeans, and Schroedinger.

Prof. Bohr’s initial rejoinder is in the form of a letter to the editor of Nature (July 13). He is shortly to publish a longer communication in the Physical Review, where the paper by Prof. Einstein, Dr. Boris Podolsky, and Dr. N. Rosen was also published.

Prof. Bohr’s criticism of the deductions of Einstein and his coauthors is based on disagreement with their criterion, or standard of test, of physical reality. He does not think that their definition of this reality can be appropriately applied to problems of quantum mechanics.

“Since, as the authors show, it is always possible in quantum theory, just as in classical theory, to predict the value of any variable involved in the description of a mechanical system from measurements performed on other systems, which have only temporarily been in interaction with the system under investigation; and since in contrast to classical mechanics it is never possible in quantum mechanics to assign definite values to both of two conjugate variables, the authors conclude from their criterion that quantum mechanical description of physical reality is incomplete.

“I should like to point out, however, that the named criterion contains an essential ambiguity when it is applied to problems of quantum mechanics.”