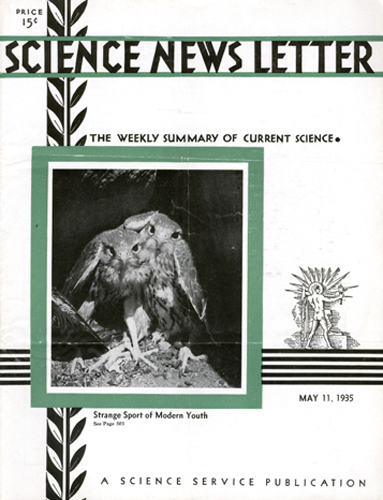 Falconry, pastime of kings and nobles in the Middle Ages, has been revived in modern America by a little group of Washington, D.C., high school boys. Under the leadership of Frank and John Craighead, twin sons of a scientist in the U.S. Department of Agriculture, these modern falconers capture and train their own hawks, fly them at such game as rabbits and sparrows, and at last willingly turn them loose as free birds, to live their own lives of fierce liberty.

For the Craighead lads and their companions are not primarily hunters, and they are emphatically not trying to commercialize their hobby. Thrill and reward enough for them in the hazardous climbing of cliffs and trees to obtain the young, half-fledged birds, and then in winning the confidence and friendship of these wild, independent-spirited pets.

The hawking adventures of the Craigheads are a curious mixture of the traditional and the modern. They whistle their hawks back to fist, or swing a lure to call them down from the air. They fetter their legs with jesses, which are little handcuffs of soft leather, snapped on to a swiveled leash. They give them wooden blocks of approved ancient pattern for their perches. But when they ride afield, they go not on gaily caparisoned horses like the knights of old, but in a small auto. And the swiftness and sureness of their birds is recorded, not in rimes of admiring troubadours, but on 16-millimeter movie film.

New “ears” for U.S. anti-aircraft guns that hear enemy airplanes a dozen miles away, automatically flood them with searchlights so that gunners can fire with daytime effectiveness in the stormiest, blackest night have been developed as the result of 5 years of research.

Cautiously buried in a technical paper delivered before the American Acoustical Society by Frank R. House, of the Sperry Gyroscope Co., were brief details of the new robot airplane sound locators. They can detect high-flying aircraft above clouds or in the black of night. Synchronized with the sound detectors are giant searchlights that quickly follow the hidden airplane throughout the sky. They make possible an accuracy of anti-aircraft gunfire at night comparable with that attained in the daytime.

Secret of their success is the system of soundproofing, which sifts out extraneous background noises and allows the sought-for drone of the airplane propeller and motor to enter the apparatus. Once inside, it is amplified to audible intensity.

The new development makes possible the operation of the “ears” in howling winds and driving rain and yields a performance equal to that obtained with the older detectors under the quietest conditions.

Professor Albert Einstein will attack science’s important theory of quantum mechanics, a theory of which he was sort of grandfather. He concludes that while “correct” it is not “complete. “

With two colleagues at the Institute for Advanced Study at Princeton, N.J., the great relativist is about to report to the American Physical Society what is wrong with the theory of quantum mechanics, it has been learned exclusively by Science Service.

Quantum theory, with which science predicts with some success interatomic happenings, does not meet the requirements for a satisfactory physical theory, Prof. Einstein is to report in a joint paper with Dr. Boris Podolsky and Dr. N. Rosen.

In quantum theory as now used, the latest Einstein paper will point out that where two physical quantities, such as the position of a particle and its velocity, interact, a knowledge of one quantity precludes knowledge about the other. This is the famous principle of uncertainty put forward by Prof. Werner Heisenberg and incorporated in quantum theory. This very fact, Prof. Einstein feels, makes quantum theory fail in the requirements necessary for a satisfactory physical theory.

These two requirements are:

1. The theory should make possible a calculation of the facts of nature and predict results that can be accurately checked by experiment; the theory should be, in other words, correct.

While proving that present quantum theory does not give a complete description of physical reality, Prof. Einstein believes some later, still undeveloped theory will make this possible.

He concludes: “While we have thus shown that the wave function (of quantum theory) does not provide a complete description of the physical reality, we left open the question of whether or not such a description exists. We believe, however, that such a theory is possible. “