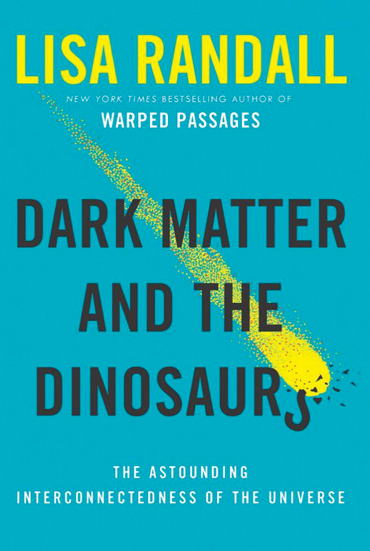 Dark matter. Dinosaurs. Few topics are as effective at grabbing the attention of science enthusiasts. But Lisa Randall doesn’t just muse about these topics for their popular appeal. The accomplished particle physicist’s latest book, Dark Matter and the Dinosaurs, draws on her 2014 study positing that mysterious invisible matter permeating the cosmos can dislodge comets from their orbits and trigger the kind of impact that wiped out T. rex and friends.

If that seems like a wild proposition, Randall admits that it is: “I’ll tell you right up front that I don’t yet know if this idea is correct,” she writes. Yet she also knows that it is a compelling hook to reel readers in as she focuses the book on communicating the broader science behind her idea. If you really want to know how something as intangible as dark matter, which has never been directly detected, could possibly upend the hierarchy of Earth’s life, then you need to learn a little cosmology, astronomy, geology and paleontology.

In describing fossils alongside the Big Bang, Randall explains how arcane-sounding concepts like inflation and orbital dynamics are integral to the emergence and history of life on Earth. Though dark matter might be to blame for mass extinctions, its gravitational influence also helped create the galactic conditions in which life could arise. Randall’s simple explanations, interspersed with anecdotes from her career, appeal even to the reader more in it for the extinctions than the physics.

The provocative proposal that led to the book, however, has holes. Randall suggests that every 35 million years or so, the solar system weaves through a thin but concentrated disk of dark matter in the Milky Way. The dark matter’s gravitational pull, while not strong enough to disturb planets or asteroids, jostles distant comets from their orbits and sends them toward the inner solar system. Unfortunately, scientists aren’t sure how the Milky Way’s dark matter is distributed, if the rate of impacts does in fact peak every 35 million years or whether the dinosaur-killing body was a comet or an asteroid.

Still, there’s plenty to get out of Dark Matter and the Dinosaurs even if the premise doesn’t hold up. It remains to be seen whether another scientist can one-up Randall with a theory connecting black holes and pandas.

Buy Dark Matter and the Dinosaurs from Amazon.com. Sales generated through the links to Amazon.com contribute to Society for Science & the Public’s programs.