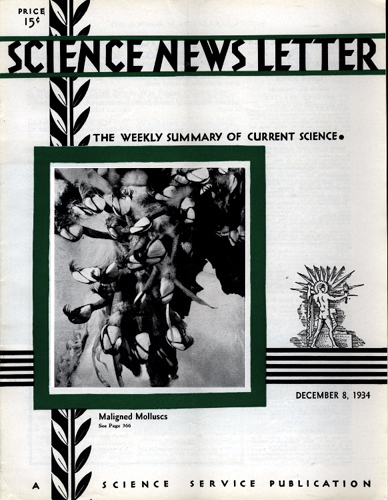 Sometimes enlightenment overdoes itself; in banishing a superstition, we fall victims to an equally unjustified incredulity. Thus, many persons, aware of the discrediting of the old fable about geese being produced from “goose barnacles,” think there is no such animal as a goose barnacle. They do exist, however; they are found abundantly adhering to pilings, ships’ bottoms, and other marine structures.

Their goose-shaped bodies, armored in shell, were responsible for the old belief. Actually, they are molluscs, kindred of clams and oysters, squid, and snails, though their peculiar mode of life has rendered them atypical in many respects.

Penetrating cosmic rays striking the Earth for eons of time may have caused the formation of the varied elements, found in the top few miles of crust, from the supposed iron and nickel core. This is the suggestion of Prof. Gilbert N. Lewis of the University of California.

Prof. Lewis’ theory entitled, “The Genesis of the Elements,” appears in the Physical Review (Nov. 15). Prof. Lewis is world-famous among chemists for his researches, among them the development, with Dr. Irving Langmuir, Nobel Prizeman, of the so-called Lewis-Langmuir atomic theory.

A new method of analyzing cosmic rays—by deflecting them in intense electric fields—has been achieved by Dr. Ernst Lenz at the Physical Institute of the Technical College, Stuttgart, Germany. (Nature, Nov. 24). Dr. Lenz is a pupil and colleague of Prof. Erich Regener, world-famous cosmic ray authority.

If cosmic rays consist, in part, of electrical particles, such particles should be deflected by both strong magnetic and electric fields. The deflection by magnetic fields has long been known, but hitherto scientists have had difficulty in detecting the electric-field deflection.

Using three Geiger-Müller counters to line up the axis of a corpuscular cosmic ray and a fourth counter to measure the angle of deflection, Dr. Lenz found that fields of 700 volts per centimeter were capable of deflecting the weaker and softer rays about four-tenths of an inch.