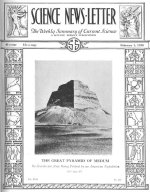 WHOSE MEMORY LIVES IN THIS EGYPTIAN TOMB?

The great tomb of an unknown Egyptian who lived about 2800 B.C. has been discovered and entered by the expedition from the Museum of the University of Pennsylvania, working at Meydum, fifty miles south of Cairo. A report just received from the director, Alan Rowe, states that the tomb is one of the largest ever found in Egypt, and it is believed that some of the burial chambers have never been plundered.

The site is already producing surprises. The tomb is a mastabah; that is, a construction with sloping sides and flat top, which covered the entrance to the burial chambers beneath. Mr. Rowe states that “after removing the debris from the tops and sides of the huge brick retaining walls, we were astonished to find that these walls were honeycombed with intrusive burials dating from the New Empire, 2000 B.C., or later.”

The accidental discovery of two San Francisco doctors that adrenal cortex extract causes disintegration of dangerous and hopeless cancers may prove to be an important addition to weapons of medical science.

So important is this new development in the fight on cancer that the University of California’s medical departments and the Hooper Foundation are mobilizing to aid Dr. Walter Bernard Coffey, chief surgeon of the Southern Pacific Hospital in San Francisco, and his assistant, Dr. John D. Humber, in further researches on the promising preparation.

An extract made from the endocrine gland, the adrenal cortex, of sheep was being used by Drs. Coffey and Humber to produce lowered blood pressure, and they noted that it had a disintegrating action upon a tumor in the same subject. In their preliminary report to the San Francisco Pathologic Society, they told how they then used the gland extract in the treatment of three hopeless cases of human cancer, one of them cancer of the tonsil. Graduated doses of the extract were injected under the skin and necrosis was caused, to such an extent that the tumors sloughed and the patients were better temporarily.

COSMIC RAYS MAY BE PARTICLES

The cosmic rays, penetrating radiations that come into our ken from somewhere outside the solar system, may not be radiated waves at all, results of the latest experiments indicate. In a communication to the German scientific journal Forschungen and Fortschritte, Dr. Walther Bothe of Berlin and Dr. Werner Kolhörster of Potsdam state that they have evidence that the cosmic rays are really high-velocity particles like beta rays, which are free electrons moving at high speed, or possibly like alpha particles, which are the stripped nuclei of helium atoms.

The two German physicists obtained their results with a specially built adaptation of the physical instrument known as the electron counter. It consisted of a cylindrical chamber, within which was a very slender oxidized wire, connected to an electroscope. Whenever a charged particle made contact with the wire the electroscope registered the impact.

Using two of these instruments, one above the other within a lead-armored vessel to keep out the earth-originated radiations, Dr. Bothe and Dr. Kolhörster frequently obtained coincidental registrations of particle impacts on their electroscopes. These they regard as having been due, in most cases, to the same particle striking both wires in succession. This would indicate that the particle came from above, with sufficient velocity to carry it through the lead armor and both tubes.

The possibility that cosmic rays may consist of moving particles instead of mere waves of energy is admitted to have radical implications by the two experimenters. To carry such particles through the resistance offered by the earth’s atmosphere would require a starting velocity imparted by a potential of at least a billion volts. On the other hand, the total energy of the bombardment that reaches the earth is small, for the measurements indicated only one impact per second for every square centimeter of exposed surface. Considering the almost infinite minuteness of beta or alpha particles, this sinks to almost immeasurably small quantities.