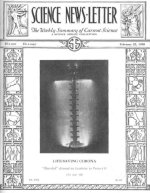 THE “BARREL” OF CORONA

When high voltage surges on electric transmission lines jump an ordinary string of insulators, arcs form from one insulator to the other and destroy them.

But when both ends of the string are protected by metal grading shields, the arc jumps through the air from shield to shield and saves the insulators, F.W. Peek, General Electric engineer, has found in his high-voltage laboratory at Pittsfield, Mass.

With the shields a greater voltage is required to produce arcing. This is probably because the additional voltage must supply energy to the “barrel” of corona which forms between the edges of the rings of the shields before the final breakdown, Mr. Peek explains.

The striking appearance of this “barrel” of corona is pictured on the front cover.

Telling “what electricity is not,” and claiming that a new language is needed to tell what electricity is, Prof. Vladimir Karapetoff, one of America’s foremost electrical engineers, predicted the further division of the electron and the finding of a wave motion with a velocity greater than that of light. He addressed the New York Electrical Society and the local section of the American Institute of Electrical Engineers.

Recent experiments are disturbing the apparently “ultimate” velocity of 186,000 miles per second of Einstein, declared the Cornell University professor and consulting engineer. According to theories of the proponent of relativity, material particles cannot move at a velocity greater than that of light, which travels at the rate of approximately 186,000 miles a second.

But Prof. Karapetoff said that some recently observed phenomena make it necessary to assume that electrons and positive carriers of electricity partake both of the nature of matter and of waves, and that the phase of these waves is propagated at a velocity greater than that of light.

People work best when the thermometer registers between 40 and 75 degrees Fahrenheit. A temperature greater than 90 degrees in moist, still atmosphere would soon become unbearable. A pulse rate of 160 beats per minute indicates that the limit of endurance of atmospheric conditions has been reached.

These facts are revealed by experiments conducted at the U.S. Bureau of Mines in Pittsburgh to find the conditions of temperature, humidity, and ventilation at which man can live and work best. They were described by Dr. W.J. McConnell, of the Metropolitan Life Insurance Company’s Industrial Health Service, before the recent meeting of the American Institute of Mining and Metallurgical Engineers held in New York City.

Weather prediction in the future must take into consideration variations in solar radiation, especially those eruptions noted in connection with sunspots, according to William I. Rooney, associate physicist of the Department of Terrestrial Magnetism, Carnegie Institution. Mr. Rooney has just returned on the Grace liner Santa Barbara from the Carnegie Observatory at Huancayo, Peru, 12,000 feet above sea level.