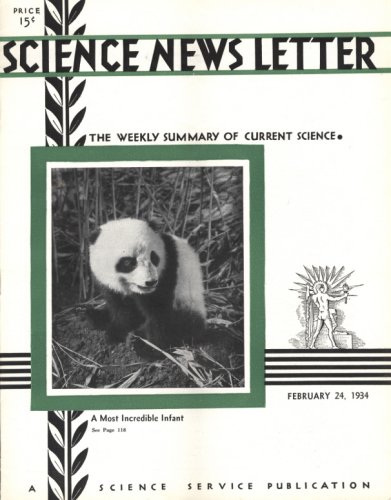 Rare among even the rarest of large wild animals is the giant panda, and rarer still is the sight of its young. Indeed, until the Dolan-West expedition of the Academy of Natural Sciences of Philadelphia penetrated to the home of these strange bear-like creatures that are not bears, in Szechuan Province, in the mountainous West of China, no white men had ever seen a panda cub. The expedition brought home the skins of a panda family group, adult male and female, and year-old cub; and these are now on view.

The little panda is remarkable in that he reproduces in every detail the astonishing markings of his parents: black ears and eye-patches, black legs, a black band over his shoulders; the rest all white. With relatively few exceptions, the pelage of young mammals differs from that of the adults.

EXISTENCE OF ANTI-PHOTON SUGGESTED BY NOBELIST

The success of science in finding the positron, which is the running mate for the electron, has spurred more speculation, and the latest prediction is that an anti-photon will be found.

Science has come a long way from the days when the atom was visualized as the ultimate unit of matter, and when energy and matter were looked upon as quite different manifestations of nature.

The photon is conceived of as the ultimate unit of radiation, or as the physicists say, it is “a quantum of radiation energy.” It is a corpuscle of light.

Physicists believe that under certain circumstances the photon can be transformed into a corpuscle of matter, such as a positron, and conversely, it will be created when a corpuscle of matter is annihilated. Naturally physicists would like to know something of the mechanism of these operations, and in a thing so far removed from direct observation,the first step is to think out mathematically how it might have been.

This step has been taken by Prince Louis de Broglie, physics Nobelist of 1929, who presented a paper on the subject to the Paris Academy of Sciences (published in the Comptes Rendus). Recalling that Prof. P.A.M. Dirac in his electron theory proposed that there were holes or anti-electrons, as he called them, into which the electron could fall and disappear from this world, and that this seemingly fantastic theory was later confirmed by the discovery of the positron, which corresponded in its behavior exactly with Prof. Dirac’s anti-electron, Prince de Broglie proposed that the light corpuscle is always accompanied in its flight by an anti-corpuscle or hole which has the same relation to it that the positive electron has to the negative electron in the theory of Prof. Dirac.

The radio “ham” may now add meteors to the list of natural phenomena affecting his reception of long-distance signals along with sunspots and magnetic storms.

During the November shower of Leonid meteors, Drs. R. Minohara and Y. Ito, of the Japanese Naval Experiment and Research Establishment at Tokyo, were working on a series of experiments for determining the height of the Kennelly-Heaviside layer, the radio-reflecting area of the upper atmosphere. It was an easy matter for them to determine, as a sort of side issue of their research, the effect of meteors on the transmission of radio signals.

Meteors speed through the upper air at the rate of 26 miles (42 kilometers) a second or more, the investigators stated in a report to the Radio Research Committee of the National Research Council of Japan. The friction caused by these objects hurtling through the atmosphere produced ionization in their pathways before the meteors are heated to incandescence and become visible. Small meteors serve to ionize the upper atmosphere, while the larger ones penetrate to and ionize the air at relatively lower altitudes.

Air or any other substance is said to be ionized when through any cause the molecules, atoms, or other particles of which it is composed have electrons knocked out of them, leaving them positively charged.

Even in the daytime, meteors affect radio waves, causing irregularities in reception, it is found. Those of relatively long wavelengths are affected comparatively little, because long wavelengths are reflected at the lower surface of the sun-ionized region of the atmosphere. Shorter waves penetrate farther and may be reflected by “ion clouds” formed by the meteors or by an upper ionized layer formed by the smaller meteors.