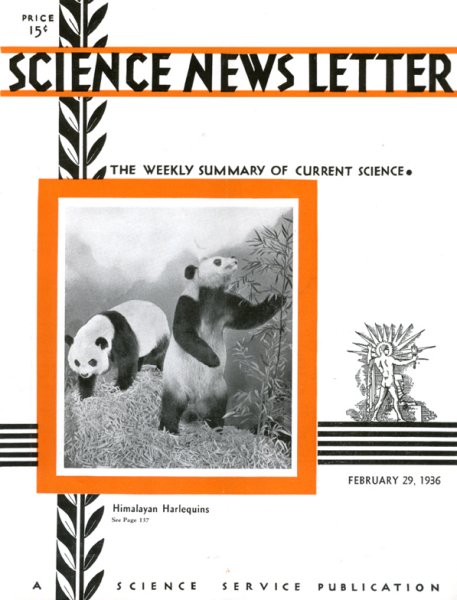 Pandas, among the rarest and most puzzling of large fur-bearing animals, will be represented at the American Museum of Natural History by a pair of handsome specimens which have been placed on display.

A photograph of the pair appears on the cover of this week’s Science News Letter.

Pandas live in the higher plateaus of interior Asia. They are about the size of black bears, which they resemble in many respects, but they are apparently more nearly related to the raccoons. Their fur is strikingly divided into golden-yellow and dark-brown areas, and they have curious, spectacle-like rings around their eyes. Their fur is much valued by Chinese natives, but owing to the rarity of the animals it does not enter Western commerce.

ORGANS KEPT ALIVE IN TUBES TO THROW LIGHT ON LIFE

Organs removed from the body and kept alive by artificial means are giving Brown University scientists a clue to the secret of how life goes on. Details of the studies, which have already led to a new theory of the life-essential process of cell oxidation, were reported by Prof. J. Walter Wilson of the department of biology.

Instead of watching the functions of the artificially living organ as a whole, Prof. Wilson is probing life’s secrets by studying under the microscope the activities of the tiny cells that make up the organ.

Heating the organ, a rabbit’s kidney in this case, Prof. Wilson noted that the breathing rate of these tiny cells mounted as the temperature rose. At the “coma point,” he saw minute liquid-crystal rods within the cells shatter. When poisonous cyanide was added to the synthetic bloodstream passing through the artificially living kidney, these minute rods, called mitochondria, broke up into bits as the kidney died of the poison.

From these and similar experiments Prof. Wilson concludes that the vital breathing of the kidney cells is governed by tiny parts within the cells and not by the cell as a unit. He believes the mitochondria play a part in some types of cell breathing, or oxidation as it is called scientifically. He also thinks that other parts of the cell, particularly the nucleus, are involved in cell breathing.

MOST OF LIGHT IN NIGHT SKY COMES FROM SUN, NOT STARS

The hiker caught out after dark on a moonless night may feel very thankful for that faint illumination which he calls starlight. But he is wrong in thinking that it all comes from the stars. Only about one-fifth of it is of stellar origin. Most of it is produced by particles of electricity, hurled from the sun at enormous speeds, and “striking sparks” as they collide with the molecules of the upper atmosphere.

Prof. Georges Déjardin, of the University of Lyons, France, describes the experiments that have led scientists to accept this theory. (Reviews of Modern Physics, January)

One may wonder how the sun can be responsible for this light when it, itself, is on the other side of the Earth. The answer to this is that the electrons are bent around by the Earth’s magnetic field so that almost as many fall on the far side, where it is night, as fall on the near side.

Displays of “northern lights” are quite similar to the light of the night sky when examined with the spectrograph and have, in large measure, the same explanation. The night sky is brighter at times of the year when the northern lights are also most in evidence, says Prof. Déjardin.

Some nocturnal light, while also coming from the sun, reaches the Earth by another route. Just as sunlight is reflected from the moon, this glow is reflected to us from small pieces of matter that fly about in empty space.