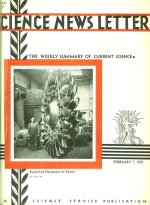 Fortunate are those countries that have small rivers falling rapidly, rather than huge, slow-moving streams. Electricity can be generated for these nations easily and cheaply.

To make electricity for Korea from the 2,000-foot fall of a mountain stream will be the life work of the Voith impulse water wheel shown on the front cover. Though its greatest diameter is just a little more than 11 feet and it weighs only 11 and a half tons, when turning at 260 revolutions per minute, this simple wheel of steel develops 50,000 horsepower.

To produce 57,000 horsepower in this country at Spier Falls on the Hudson River, a huge, slow-turning water turbine, which weighs nearly 10 times as much as the simple little Voith wheel, is required. It turns at 81.8 revolutions per minute under a head of 81 feet.

The development of a new type of electric illuminating unit that, it is said, uses only half the power required by present incandescent filament bulbs and gives a softer and more uniform light has been announced by Claude Neon Lights, Inc., of New York.

The new lighting unit is the result of refinement of the red, tubelike neon electric signs, which have come into wide use during the past few years, and brings to more complete development a previous invention of Georges Claude, famous French engineer and scientist who last year conducted notable experiments in Cuba to get power from temperature differences of sea water.

A very high voltage is needed to operate the red signs, but the new lighting units, radiating either incandescent white light or a light containing approximately the same wavelengths as that from the sun, can be used with ordinary house wiring or either 110 or 220 volts, alternating or direct current, officers of the Claude organization said. It is stated that these new low-voltage units are ready for application in the industrial and commercial field and that tubes or lights for general household use will be manufactured soon.

A plea that women biologists, when they marry, always continue to use their maiden names upon scientific publications has been made by Dr. T.D.A. Cockerell of the University of Colorado.

The increasing importance of the scientific work of women and the confusion that results from scientific references to the work of the same woman under two names were advanced by Dr. Cockerell as reasons for his suggestions.

It would be possible for the woman scientist, if she wished, to add the married name: “By Mary Smith (Mrs. William Jones).”