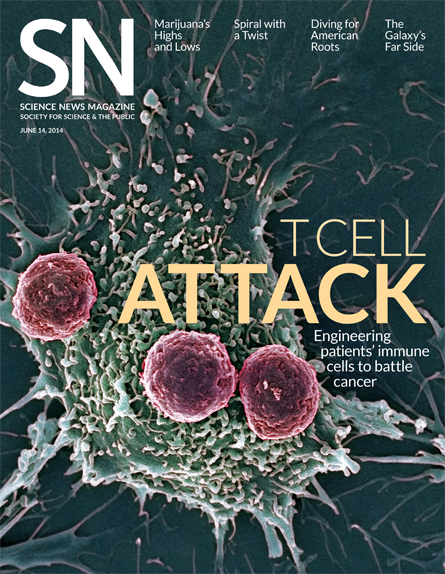 Marijuana can tweak the brain’s normal functions, and young people may be particularly vulnerable. Laura Sanders delved into the science behind pot’s neurological effects in “High times” (SN: 6/14/14,p. 16).

Legalization is a hot issue, and Science News’ website, Facebook page and Twitter feed exploded with opinions from readers, many of whom argued for laxer laws on cannabis use. Even those with a pro-pot outlook, however, agreed that marijuana should be treated with the same caution as any other drug, particularly when children are involved. “Few substances, if any, can be truly regarded as harmless,” wrote online commenter mjverite. “We know, for example, that approximately 150 people per year die from acetaminophen. Those with serious underlying health conditions would do well to do their research and speak with their medical provider before using cannabis.” Dan added, “Keep it out of minors’ hands until they have developed enough to make smart choices.”

Well done for your article on marijuana in your June 14 issue.  It was well balanced, something often difficult to do on controversial topics.

Thomas Ostwald summed up the discussion succinctly: “What the feature made clear is that the research is in its infancy, and we know very little for sure.”

Male lizards lose a little swagger in the presence of predators, as Meghan Rosen reported in “Lizards may scale back head bobbing to avoid predators” (SN: 6/14/14, p. 14). Brown anoles toned down the flashy display they use to attract females when researchers added carnivorous lizards to their island habitats.

Some readers were appalled that researchers loosed predators on an unsuspecting ecosystem. “Who thought it was a good idea to introduce ‘carnivorous curly-tailed lizards’ to an island population?” asked Rebecca L. Walker-Sands by e-mail. “Disruption of ecosystems to study sexual selection seems a bit extreme.” John Day offered a suggestion for a new study: “What say we introduce hungry tigers into the authors’ lab to see if it reduces their swaggering, head-bobbing behavior?”

The researchers didn’t remove the carnivorous lizards, Leiocephalus carinatus, after introducing them to the islands, but the experiment was on a small scale, says Rosen. “The small islands used in the study host only about 280 square meters of vegetated area, on average — about the size of a big house. And they’re naturally prone to colonization by L. carinatus living on larger islands nearby.”

In “A new twist on a twist” (SN: 6/14/14, p. 32) Rachel Courtland described how researchers are striving to create an imperfect helix. A change in a normal coil’s rotational direction, called a perversion, produces a shape known as a hemihelix.

“Also known as ‘the thing that happens to every Slinky, ever,’ ” joked Jake Nielsen. Readers’ familiarity with the twisted twists didn’t end with toys. “To think, all these years the secret to DNA structure was right there as we tried to unwind our old phone cords,” wrote Scott McCain. “The longer the cord, the worse it was — I wonder if long DNA strands suffer the same fate?”

“Indian frogs kick up their heels” (SN: 6/14/14, p. 5) announced the discovery of a handful of new species in which some males catch a female’s attention with a toe-tapping, high-kicking routine.

The frogs reminded Jean Mann, and some Science News editors, of another well-known dancing amphibian: “This behavior was surmised by Warner Brothers as early as the mid-1950s, and aptly illustrated in the depiction of the character Michigan J. Frog. Michigan’s repertoire, of course, included not only leg-kicking behavior, but also involved top hat–wearing, cane-twirling and singing. Only time will tell if these additional mating behaviors predicted by Warner Brothers are ever observed in the wild.”