In “Cool idea” (SN: 10/5/13, p. 26), Erin Wayman explored the potential climate benefits of cutting back on emissions of black carbon, a component of soot, and other lesser-known climate warmers.

Reader Ellis Johnson e-mailed that U.S. EPA regulations have greatly reduced particulate matter emissions from diesel vehicles in recent years. “When was the last time you saw black smoke coming from a highway truck?” he asks. Wayman responds: “The United States has made great strides in reducing pollution from diesel vehicles, but in many parts of the world, diesel trucks and cars are still a major source of black carbon.”

A related climate-changing problem is pointed out by reader Natasha Aristov. “I can imagine that some powerful people will, instead of implementing climate-warming prevention measures at home, point their fingers at developing countries implying that the soot problem is ‘mostly their (or their cookstoves’) fault,’ ” Aristov says in an e-mail. 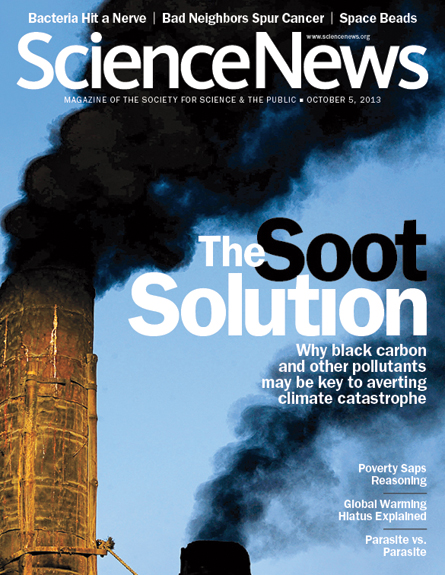 But she has noticed a problem in developed countries: old or inefficient cooling fans that waste energy on vibration. “Replacing these fans does not require any changes in lifestyle (such as riding a bus instead of driving a car), does not require massive reforms of infrastructure, does not even require years of research in technology or materials science — the knowledge is there.”

Tim Cliffe e-mailed to say that we left out part of the story: female choice in mating. “Females, like males, must have successful mating strategies if their genes are to persist in the population,” he writes, suggesting that females might sometimes prefer short-horned males. “Evolutionary logic suggests that females should mate with the small-horned males only if doing so would tend to enhance the females’ own fitness,” he says. Shugart replies: “According to study leader Susan Johnston of the University of Edinburgh, female Soay sheep don’t appear to have much of a say in the matter. Rather, females will mate with any mature male that wins access to them through fighting (or in the case of smaller-horned males, seizing an opportunity to sneak in).”

What do you think?

Some readers found it odd that the 1963 article mentioned that an explosion started 1.5 million years ago, but that the light had just reached Earth, 10 million light-years away. “The way it is stated certainly makes it sound like the light traveled 10 million light-years in 1.5 million years,” Doc Dougherty says in an e-mail. Apparently readers in 1963 found it strange too. Upon further research, we discovered that the December 21, 1963, edition of Science News Letter addressed the issue. “When astronomers are dating events believed to have occurred in a celestial object, such as the explosion of a galaxy, they measure the time backward from the present when it could have been seen from the Earth,” the editors wrote.