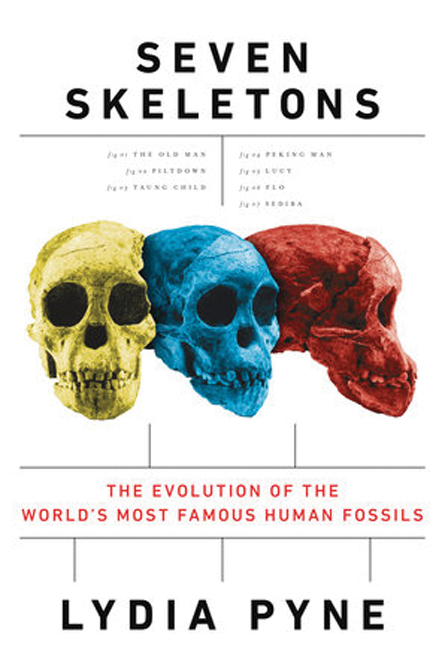 After decades of research revealing their sophisticated lives, Neandertals still can’t shake their reputation as knuckle-dragging cavemen. And it’s the Old Man of La Chapelle’s fault.

The Old Man of La Chapelle was the first relatively complete Neandertal skeleton ever found. Three French abbés discovered the bones in 1908. Soon after, geologist and paleontologist Marcellin Boule analyzed the remains. His conclusion: The ancient individual was a hunched, dim-witted savage. At the time, little was known about human evolution, and Boule’s findings made headlines worldwide. The publicity helped to sear the image of the brutish Neandertal into the public’s mind — so much so that even after subsequent studies determined the Old Man had arthritis and suffered from other abnormalities, it was too late to break the caveman stereotype.

The story of the Old Man and six other famous hominid fossils are the focus of Lydia Pyne’s Seven Skeletons. Pyne, a writer and historian, considers how these fossils have shaped our views of human evolution. She also seeks to understand why some fossils end up on T-shirts and postcards, become national symbols and inspire fan fiction while others remain anonymous specimens in museum collections.

Pyne acknowledges that some experts might quibble with her list — Ardi the Ardipithecus (SN: 1/16/10, p. 22), for instance, didn’t make the cut. But her selections highlight the different ways a fossil can achieve celebrity status. Catchy nicknames, media attention, unusual circumstances surrounding a discovery and even scandals can help. The diminutive hobbit, Pyne argues, benefited from being unveiled around the same time the last installment of the Lord of the Rings trilogy hit theaters.

Of course, scientific merit — being the first of a kind, a nearly complete skeleton or something completely unexpected — doesn’t hurt either. Lucy, the first Australopithecus afarensis ever found, has become the yardstick by which all other hominid discoveries are now measured, Pyne explains. (One thing she underemphasizes at times, though, is the necessity of a tireless cheerleader to promote a fossil’s significance.)

The book provides plenty of interesting backstory for each fossil. Readers expecting a primer on human evolution, however, will be disappointed. Pyne focuses on the cultural history of her subjects, not the actual science. But her book does provide a peek at how the field of paleoanthropology itself has evolved over the last century.

Buy Seven Skeletons from Amazon.com. Sales generated through the links to Amazon.com contribute to Society for Science & the Public’s programs.