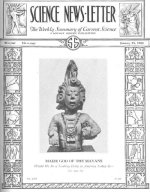 IF AMERICA HAD NOT BEEN DISCOVERED

The suggestion that ancient America appears to parallel ancient Europe rather remarkably was made recently by Dr. A.V. Kidder, archaeologist of Phillips Academy, Andover, and director of archaeological researches for the Carnegie Institute of Washington. Dr. Kidder pointed out that the Mayan Indians who lived in Central America and Yucatan developed there a culture which was the finest in America, very much as the Greek was the highest culture of Europe.

These Mayas, starting as a primitive group, several thousand years before Christ, established the foundations of a resplendent civilization. By the first century A.D., they were building impressive stone temples and government buildings, around which the thatched huts of the people spread out in great cities. Indian artists adorned the white limestone and stucco buildings with beautiful exotic sculptures and paintings, and engineers built wide stone highways, probably for ceremonial use, leading to important places of worship.

Born of the talkies, a film phonograph capable of playing continuously for two hours from a 400-foot reel of motion picture sound film has been perfected by Dr. C.H. Hewlett, engineer of the General Electric Company. From a reel of film small enough to fit into a coat pocket a complete play or opera can be reproduced, which otherwise would require 15 to 20 ordinary 12-inch disc records.

Talking motion picture technique allowed Dr. Hewlett to achieve his result. In one of the principal methods of recording sound for the talkies, a jagged line photographed on the edge of the film is the representation of the sound. Light passes through a narrow slit, through the film onto a photoelectric tube. As the teeth of the jagged lines pass by the slit, they vary the amount of light reaching the tube, which in turn varies the intensity of an electric current. When this current is amplified and fed into a loud speaker, a reproduction of the original sound emerges.

Electronic bullets, fired with electricity as low as thirty volts, which can be obtained from a battery of twenty dry cells, are capable of killing at least one common form of germ. In a study made at the University of Cincinnati, Dr. D.A. Wells has found that Staphylococcus albus, the mildest of several germs that produce boils, are destroyed by these relatively low speed electrons, moving at speeds of a few miles a second. High speed electrons driven by voltages of several thousand, have already been observed to have a germ-killing effect.