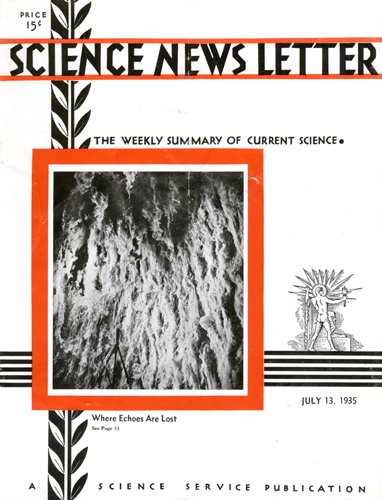 The microphone shown on the front cover of this week’s Science News Letter is not broadcasting from among the stalactites of some underground cavern. The curious formations shown are nothing more romantic than cotton waste covering the walls and ceiling of a soundproof room in the General Electric Company’s general engineering laboratory at Schenectady, N.Y.

The waste is thus used to minimize reflection and resonance of sound generated within the room. Sensitive sound-measuring instruments are calibrated there and then taken to another soundproof room to determine the amount and types of noise prevalent in motors and other electrical apparatus.

Prof. Albert Einstein, Nobel prize–winning scientist of the Institute for Advanced Study, has just announced a new theory that should profoundly affect the whole structure of physical science.

Continuing his world-recognized role as scientific “coordinator,” Prof. Einstein offers the first mathematical “signposts” that may point the way to a welding of his own famous relativity theory and the new quantum theory into a single, more powerful tool for science.

Both relativity theory and quantum theory have been of such fundamental importance that the men who devised them have won the highest award in science—the Nobel prize.

Here are the outstanding, startling concepts of Prof. Einstein’s new and yet-unnamed theory:

In a report to the Physical Review (July), official publication of the American Physical Society, Prof. Einstein, with Dr. N. Rosen as collaborator, describes how his own general relativity theory accounts for the large-scale happenings of nature but fails when attempting to explain the atomic structure of matter.

At the same time, he adds, quantum theory, while highly successful in describing the interactions of atoms and their still-smaller parts, fails to explain phenomena in the field of relativity.

At present, depending on the job at hand, science chooses either one or the other theory as a “tool.” In analogy, science is now working like a carpenter who uses a saw to cut wood and a hammer to drive nails.

Prof. Einstein, in trying to combine the two theories, would like to have science (as a carpenter) have one tool that both cuts wood and drives nails.

Sufficiently complex in its mathematical details to tax the ingenuity of the legendary 12 men who were originally said to understand Einstein, the new theory of the distinguished professor pictures space as represented by two sheets. The presence of an elementary particle without electrical charge in this space is represented as a “bridge” connecting the two sheets.

With the help of this “sheet-space and bridge” picture, “one is able to understand the atomistic character of matter as well as the fact that there can be no particle of negative mass,” Prof. Einstein reports.

An important and unusual outcome of the new theory is that the “most natural electrical particle in the theory is one without gravitating mass,” to use Prof. Einstein’s own words.

A particle without gravitating mass would be one that weighs nothing. This state of zero mass is represented by one “bridge” between the two sheets of space.

Are the distant nebulae redder than the nearer ones because they are receding with enormous speed or, as many like to believe, is there some other explanation, such as attributing the red shift to the action of electrons in free space?

Prof. Roy Kennedy and Walter Barkas of the University of Washington announced at the meeting of the Pacific division of the American Association for the Advancement of Science that they had tested the matter experimentally and found that electrons could not be held responsible because there are not enough of them.

They used a special instrument called an interferometer, designed by Prof. Kennedy, which is capable of detecting a change of a billionth of an inch in a foot. Still no effect of electrons could be seen even with millions of millions present. Prof. R.C. Tolman, new president of the Pacific division of the Association, announced that he and Dr. Edwin P. Hubble, recent winner of the Barnard medal for his work on the red shift, were practically convinced that no known effect other then recession of the nebulae was competent to account for the observations of the red shift.