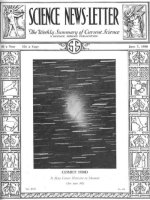 COMET MAY CAUSE METEORIC DISPLAY

If you watch the sky during the nights of early June, you may be treated to an unusual display of meteors, or “shooting stars.”

For comet 1930d, as the astronomers call the new visitor to the heavens discovered by the Germans Schwassmann and Wachmann, is expected to cause a meteoric display about June 9, radiating from the region of the sky slightly west of the constellation of Hercules and above the Northern Crown. This is the prediction of the Japanese astronomer Prof. Issei Yamamoto of Kyoto, Japan, and American astronomers are urging all interested to keep a sharp lookout for an unusual number of meteors.

The color of the new planet Pluto, as Planet X has been christened by its discoverers at Lowell Observatory, is totally unlike that of the other outer planets but resembles the inner ones, Roger Lowell Putnam, trustee of the Lowell Observatory and nephew of the late Prof. Percival Lowell, founder of the observatory, announced to Science Service.

Mars at the immense distance of Pluto would be no brighter than the new planet, Mr. Putnam declared. If it is assumed that Pluto reflects the same proportion of the sun’s light as the moon or the innermost planet Mercury, then computations show that Pluto would be larger than the planet Mars, which itself is not much smaller than Earth.

“It is too soon to draw definite conclusions on the new planet,” Mr. Putnam said, “but the fact remains it was discovered substantially in the place predicted by Prof. Lowell, and its discovery was wholly due to the work started by him.”

An epoch-making discovery has just been made in Gypsum Cave near Las Vegas, Nevada, which establishes beyond question the interesting and important fact that man lived in America before the strange animals typical of the Pleistocene Age had become extinct. The find consisted of charcoal and ashes, relics of an ancient campfire, nearly 8 feet below the surface and directly beneath a solid unbroken layer of manure left by the extinct ground sloth Nothrotherium, and preserved by the dryness of the cave. It is the crowning discovery of nearly five months of intensive work in this cavern on the part of a joint expedition sent out by the Southwest Museum of Los Angeles and California Institute of Technology of Pasadena. The actual discovery was made by E.G. Ward, expedition assistant.