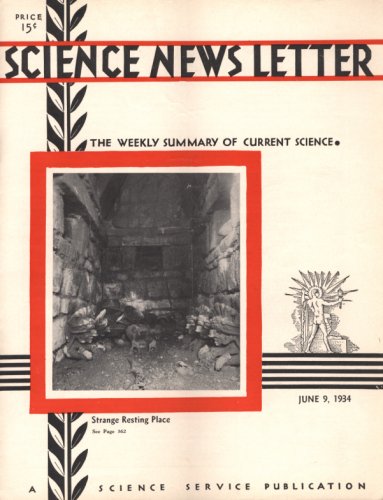 A tomb guarded by the fierce figure of a tiger with bared fangs is a recent discovery of scientists exploring Monte Alban.

The discovery was unexpected. The Mexican archaeologists had chosen a place more than a mile from the cemetery zone of the ancient Indian city, and had begun digging there in hope of finding articles used by the city inhabitants buried in undisturbed layers in the ground. But now it appears that very little of the enormous buried mountain city is natural ground. Every spot seems to have been built up, cut down, leveled, or otherwise changed.

The new tomb, the fiftieth found since 1931, holds the reburied bones of what appear to be four individuals. Only a few bits of jade and pottery are with them. But the tomb has an annex, or storehouse, joining it, piled with the trappings of the dead.

The interior of a tomb similar to number 50 is pictured on the front cover of this week’s Science News Letter. It is the fortieth discovered, and illustrates clearly the V-shaped construction of the ceiling, niches in back and side walls, quantity of plain, black pottery, and the customary number of five ornate funerary urns. Three sit on one side of the extended skeleton and two on the other. The tomb is about a yard wide. Earth, sifting through cracks in the stone, has covered the stone floor and the objects on it with a thick layer.

DRY ICE MAY COMPETE WITH BLOW TORCH IN METALLURGY

Solid carbon dioxide, popularly named “dry ice,” may, at a temperature of 112 degrees below zero Fahrenheit, compete with heat in securing “shrink fits” for machine parts.

W.H. Swanger of the National Bureau of Standards, who has been conducting experiments with solid carbon dioxide, reports that machine shop practice may come to accept the new method of applying excessive cold instead of heat in shrinking metals.

When it is necessary to secure a metal band to a shaft, the usual practice is to heat the band. Expansion allows it to be slipped into place, and as it cools it contracts to a tight fit. However, by “refrigerating” the inside part, or shaft, it can be shrunk materially. The band is slipped on, and when the shaft warms to room temperature it expands to normal size, and a tighter fit is secured.

Relatively a curiosity 5 years ago, the domestic production of frozen carbon dioxide has in recent years exceeded 40,000 tons.

Airplane time records for flights of 500 miles or longer now await the will of the meteorologist. With the use of the modern high-performance plane, whose cruising speed is not materially affected by higher altitudes, as much as a fifth in time may be saved by choosing the correct flight path.

Combining a consideration of the air mass fundamentals and many arduous aerodynamical calculations of aircraft performance, W.C. Rockefeller, research fellow in the meteorological department of the California Institute of Technology, has developed a graphical method to determine the most efficient flight course for a given airplane. Thus, shortened time schedules for air transport companies can be expected. Where punctuality in schedules is more desirable than time records, lower operation costs will result by using a lesser fraction of the allowable power output of the engines whenever meteorological conditions are favorable.